Road Safety Authority says 64,500 waiting 25 to 30 weeks due to shortage of testers 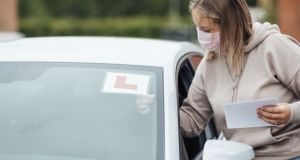 The RSA had applied to the Department of Transport to hire an additional 80 driving testers. Photograph: iStock

Waiting times for driving tests have more than quadrupled to between 25 and 30 weeks due to the suspension of testing during the first Covid-19 lockdown, the Road Safety Authority (RSA) said.

Liz O’Donnell, chairperson of the RSA, told the Oireachtas transport committee that there were 64,500 people either scheduled or eligible to take a driving test.

The RSA had applied to the Department of Transport to hire an additional 80 driving testers to reduce the backlog and she hoped that this would be approved shortly, she said.

Ms O’Donnell said the delays in sitting a test were “inevitable, unfortunately” and a legacy issue from the suspension of the services during the lockdown between March and May.

She told the committee that the issue was “of most concern and frustration” for customers.

Prior to the pandemic, people were waiting on average six weeks to sit a test.

Delays have risen sharply to between 25 and 30 weeks as a result of a “capacity problem” and a shortage of testers, the Oireachtas committee was told.

Ms O’Donnell said the RSA has been conducting 3,500 tests per week or 35,000 in total since July and was aiming to reduce waiting times to 10-week average but “it will take time.”

The RSA had made a submission to the department in October seeking approval for funding to recruit the additional drivers.

“We do hope that the department will respond very quickly to that,” she said.

Fine Gael TD Kieran O’Donnell, chairman of the committee, said that the recruitment of the additional testers must be expedited given the high costs young people were paying for car insurance because they were unable to sit tests to secure a full driving licence.

Ms O’Donnell said there has been an increase in road fatalities this year compared with last year, with 11 additional deaths on the roads during 2020.

“This is a concern and emphasises the need to continue focusing on educational and enforcement measures to tackle the main causes of collisions,” said the former Progressive Democrats TD and minister of state who has been reappointed RSA chair for a further term.

There have been 136 people killed on Irish roads so far this year, compared with 125 over the same period last year.

Ireland was ranked the second safest EU member state for road safety in 2019 - second in terms of road deaths, behind Sweden. The State is ranked the fourth safest worldwide, she said.