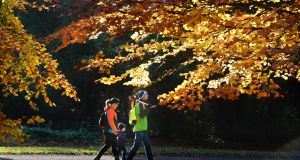 Covid-19 lockdowns might have made more people embrace a lifestyle of sport and fitness but new research suggests it might not be a legacy of the pandemic.

Sport Ireland data shows that while levels of activity increased during periods of Covid-19 restrictions, they fell away again during the reopening phase. The study, conducted by Ipsos MRBI, was undertaken to gain insight into the effect of the health crisis on sport and walking in Ireland.

While it shows a decrease in overall “activity” after periods of lockdown, there is plenty to bolster confidence in a fitter and healthier country.

It found that while the number of people playing sport now is broadly similar to 2019, there has been increased participation in cycling and running, although the numbers swimming have undergone a “sharp fall”.

Walking too has been something of a success story: the proportion of recreational walkers increased and remains ahead of last year’s levels. The data shows it moved from 66 per cent in 2019 to as high as 80 per cent during Covid-19 restrictions and currently remains at just under that. Arguably one of the most accessible of activities, it has increased across all regions but most strongly in Dublin. The lower levels of recreational walking were found among those aged 35-44.

The research was undertaken between March and September among an initial sample of 1,000 and a later additional phone survey.

On gender lines, increased activity was more or less equal between men and women during the reopening phase after the first lockdown with 83 per cent of the former and 85 per cent of the latter involved.

However, overall there were lower levels of sport participation found among women; male participation was described as being “more robust”.

“The gender gap in sports participation was eliminated during the stay-at-home phase, however this re-emerged during later phases,” the study results pointed out.

Overall, however, there were positive signals with 77 per cent of respondents saying it was more important to be active during the pandemic compared to other times. And with 79 per cent saying physical activity was now part of their weekly routine, 90 per cent of those who took up a new pursuit said they would continue it in the future on a regular basis.

One in five people (19 per cent) said they had taken up a new type of physical activity since restrictions were introduced.