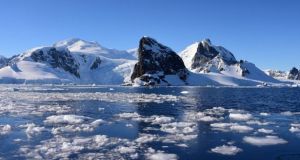 Ice continues to melt: The average global temperature in 2020 is set to be around 1.2 degrees above the pre-industrial baseline of 1850-1900. Photograph: Johan Ordonez/AFP via Getty Images

This year is on course to be one of the three warmest years on record worldwide, while the current decade will be the warmest ever, according to the World Meteorological Organization (WMO).

The worsening trends are being driven by climate disruption and rising greenhouse gas (GHG) emissions, it warns.

In its provisional annual statement on the state of the global climate issued on Wednesday, the UN body says it has been “another extraordinary year” for the Earth’s climate, with a combination of heatwaves, wildfires, hurricanes and floods compounding threats to people’s lives, health and security created by the Covid-19 pandemic.

The decade 2011-2020 has been the hottest in temperature records stretching back to 1850, with the warmest six years on record all occurring since 2015.

“There is a one-in-five chance that global average temperatures will temporarily exceed the threshold of 1.5 degrees above pre-industrial levels by 2024,” it warns. Under the Paris climate treaty, countries are committed to trying to curb global temperature rises to 1.5 degrees; a level beyond which the worst impacts of climate change will be felt.

Heat in the oceans is at record levels, the WMO report notes, with 80 per cent of the world’s seas experiencing a marine heatwave at some time in 2020. “This has hit wildlife and habitats already affected by increasing acidity as excess carbon dioxide dissolves into the water.”

Ice continues to melt, sea levels are rising and extreme weather is creating severe droughts. The Siberian Arctic was 5 degrees hotter than normal this year resulting in accelerating melting of ice sheets, while heatwaves led to new temperature records in Australia, the Caribbean, Israel and much of the Middle East.

WMO secretary-general Prof Petteri Taalas said that while the world is currently experiencing “a La Nina moment” when natural weather patterns cool global temperatures, that has “not been sufficient to put a brake on this year’s heat”.

Coinciding with the WMO analysis, Met Éireann released Ireland’s meteorological data for 2020 which provides further evidence of a warming Ireland.

The temperature and rainfall data provides evidence of the country’s changing climate including:

– 2020 is on course to be the 10th consecutive year with an above normal temperature;

– 2020 data indicates 19 of the 20 years of this century have had an above normal temperature;

The huge variation this year was typified in the switch from record rainfall to parts of the East soon having their driest Spring on record. Countrywide, only 58 per cent of normal rainfall fell in March, April, May. During August sustained wind (10-minute mean) and gust (3-second mean) records were broken during Storm Ellen.

Met Éireann’s senior climatologist Keith Lambkin said that as the WMO publishes its provisional statement, it’s an opportunity to reflect on how 2020 compares to Ireland’s normal climate.

Extreme weather experienced in Ireland in 2020 is likely to become more common into the future. “Our analysis shows a wetter winter and drier spring than we have been used to. This pattern is in line with predicted climate change-related trends for Ireland.”

As records continue to be broken globally, so too are records were being broken in Ireland. “The science is complex but the message is simple - to reduce the extremes we must reduce the warming,” Mr Lambkin added.

Outlining the national picture, he said: “We saw the impact of such weather on our daily lives this year with the high level of flooding in February, particularly in the Shannon catchment. At the other end of the spectrum, a national hosepipe ban was introduced after parts of the East had its driest Spring on record. A number of significant storms during 2020, including Brendan and Ellen, caused loss of electricity, affecting people and businesses throughout the country.”

“The warming we see globally is also observed here in Ireland and it is this warming that increases the risk of more extreme weather events,” he said.

The WMO figures show despite the Covid-19 lockdown, atmospheric GHGs continued to rise globally, “committing the planet to further warming for many generations to come”; and a series of worsening trends.

These include a record number of hurricanes in the Atlantic; wildfires consumed vast areas in Australia, Siberia, the US West Coast and South America, sending plumes of smoke circumnavigating the globe – and flooding in parts of Africa and South East Asia which led to massive population displacement and undermined food security for millions of people.

Responding to the WMO report, Christian Aid’s climate change lead Dr Kat Kramer said: “This is a sobering reminder that despite Covid-19, climate change continues to rumble on, causing mayhem around the world. Although the pandemic will have been the biggest concern to many people in the developed world in 2020, for millions in climate vulnerable places, the climate emergency remains the biggest threat and sadly there is no simple vaccine to fix the climate.”

These findings show just how important it is to ensure “economic recovery measures don’t entrench the fossil fuel economy but act to accelerate the transition to a zero-carbon world.”