43,192 people now waiting for test with list expected to lengthen in run-up to Christmas 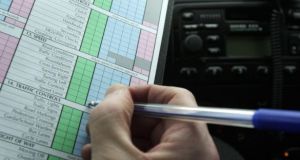 Candidates applying for a driving test this week will likely have to wait eight months for an appointment due to Covid-19 delays.

With the situation worsening in the run-up to Christmas, it will be the second quarter of next year before new testers can make significant inroads in the backlog.

That is according to the Road Safety Authority (RSA) which said 43,192 people are now waiting for an appointment. When the service was suspended in March due to coronavirus, the average waiting time for a driving test was less than six weeks.

Testing centres reopened to car testing on July 29th and have only recently reached 75 per cent capacity and are unlikely to rise much above that while working amid Covid-19 restrictions.

A total of 15,111 people are scheduled to take a test over the next five weeks. However, these are not part of the 43,192 waiting for an appointment and the RSA said lists are expected to lengthen in the run-up to Christmas.

“From now on, given the high number of people already waiting to be scheduled for a driving test, anyone applying for a test will probably face a 30-week delay in getting an appointment,” the authority said.

Candidates whose test appointments were cancelled when the service was suspended, have all been offered a test date. Appointments were offered in order of application date and for cases of essential workers.

Testing centres are also operating a cancellation list. The RSA said it was taking a number of steps including: increasing the number of tests a driver tester can perform each day, from five to six; scheduling additional overtime tests, including testing on Saturdays; rehiring up to 19 driver testers who were previously employed; recruitment and training of new driver testers.

However, the authority said it “will be the second quarter of 2021 before these new recruits begin to make an impact on waiting times”.

The authority appealed to any candidate who cannot attend their test to contact them so the slot can be allocated to another candidate on the cancellation list.

Details of the backlog came as RSA approved driving instructors protested at testing centres in Finglas and Sligo at Covid-19 restrictions which deny them access to facilities in test centres. The instructors, members of the Unite trade union, also want to engage with the safety authority on the design of the mandatory 12 lessons that candidates must take. They also want an end to the use of paper log books while the Covid-19 crisis continues.

The priority list is not a cancellation list, but is designed to offer customers priority scheduling when more appointments are released, she said.

The reason the appointments are released in this way was to assist the operators with staff scheduling, she added.