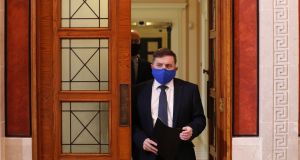 Strict limits on the hospitality industry and advice to avoid travel are among a series of new restrictions to be introduced in Derry and Strabane from next week in response to the coronavirus “emergency” in the district.

However the North’s first minister, Arlene Foster, said it was “by no means a lockdown”, and schools, childcare facilities and churches would remain open, and weddings and funerals would continue to take place.

The measures were agreed by ministers at a meeting of the North’s Executive on Thursday.

Under the new rules, pubs, restaurants and cafes will only be allowed to open for takeaway, delivery and outdoor dining, and hotels can only provide services to residents and those who have booked weddings or funerals.

No organised indoor gatherings can take place, such as those in community halls, and indoor sport is limited to individual training only.

Organised outdoor gatherings will be limited to 15 people, and spectators are banned from sporting or other events.

All museums, galleries and cultural attractions must close.

People living in Derry and Strabane should work from home where possible and avoid any unnecessary travel, while those living outside the council area should not travel into it unless absolutely necessary.

“None of this is at all easy,” the deputy first minister, Michelle O’Neill, said. “But it is an emergency and it requires an emergency response.”

The new rules will come into force from next week, but people living in the Derry City and Strabane District Council area have been asked to adopt them immediately. They will initially be implemented for a two week period, and reviewed every week.

They are in addition to the restrictions on gatherings in private households which are already in force throughout Northern Ireland.

The North’s Chief Medical Officer, Dr Michael McBride, said the situation in Derry and Strabane was “rapidly escalating” and “unless we intervene now, unless we all do the right thing” in three to six weeks time the number of hospital admissions could equal those seen during wave one of the pandemic.

Worst in the British Isles

The most recent figures from the North’s Department of Health (DoH), released on Thursday, showed that 486 new cases of Covid-19 had been identified in the council area in the last seven days.

Two more coronavirus-related deaths were reported on Thursday, bringing the total number of fatalities recorded by the Department to 581.

An additional 259 cases of Covid-19 were confirmed, bringing the total number of positive cases of the virus which have been identified in the North since the beginning of the pandemic to 11,952.

The hospitality and business sectors in Derry and Strabane have called for an immediate package of financial support.

Ms Foster acknowledged the announcement would “come as a hammer blow to businesses in the north west” and said ministers were already working on how to provide help for those affected.

Ministers also discussed on Thursday the need for stronger enforcement of the existing regulations, and the level of fines currently in place is to be reviewed.

“To those who ignore the law, and who thumb their nose at the Executive and what we are trying to do, tougher penalties and enforcement is coming, I want to make that very clear,” Ms Foster said.