Dying with Dignity Bill will give back control, says terminally ill man 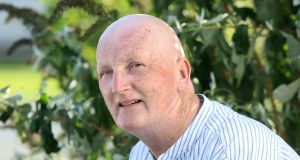 Brian Lynch, who supports the Dying with Dignity Bill, at his home in Gort, Co Galway. Photograph: Joe O’Shaughnessy

The proposed Dying with Dignity legislation will allow terminally ill people to make “a choice” about how to live their final days and have “a more dignified death”, a man with terminal cancer has said.

Brian Lynch from Gort, Co Galway, who was diagnosed with inoperable stomach cancer in late 2018, says passing the Bill, which seeks to legalise assisted suicide, would allow people to take back control of their lives from an illness that can dictate their every move.

“When cancer comes to your door you don’t have a choice about letting it in,” said the 53-year-old. “We have to live with that cancer. But we should have a choice to die with dignity.”

The Private Member’s Bill, tabled by Solidarity-People Before Profit TD Gino Kenny was debated in the Dáil on Thursday will see its first vote next week. However, the Government has decided to propose an amendment which would see the legislative process paused for a year to enable a special Oireachtas committee examine the issue.

Mr Lynch says the proposed legislation is not about giving “definite instruction” on how to die, but would offer terminally ill people an alternative to unnecessary suffering.

At the end of the day it’s the person with cancer who has to live with cancer. It should be that person’s choice

He had been working as a self-employed house painter for two decades when he started experiencing heart burn in late 2018. He took Gaviscon for three weeks and made a doctor’s appointment when the symptoms didn’t improve. A few weeks later he was diagnosed with inoperable stage three stomach cancer. He underwent chemotherapy between January and September 2019 and after a six-month break from the treatment his cancer returned. He recently completed another 12 rounds of chemotherapy.

“The chemo this year is the exact same as last year but it has a higher toll on my body. My bone marrow is now affected. I used to be able to walk it off but now I’m tired all the time. If my cancer returns within the next three months I’m not as strong as I was last year. The more treatment I get the weaker I get. I know myself I can’t stay on chemo forever.

“Twice last year I asked my oncologist about surgery and twice I got the same answer, that my cancer is inoperable. I don’t ask anymore.”

Mr Lynch says he initially withheld the severity of his condition from his three children who are in secondary school and college. However, with the family at home during lockdown when he restarted chemotherapy last March, there was no point in hiding the full story.

“At the start I told them white lies, I used to hide stuff about the lymph nodes. If they went on the internet they’d read bad stuff. But there’s no point in hiding it anymore. Because of Covid, my kids have seen the full thing.”

Having picked up an infection while brushing his teeth last year, Mr Lynch is acutely conscious of the dangers of contracting Covid-19 in his condition. “I’ll end up in A&E and might not come back out.”

Mr Lynch has discussed the Dying with Dignity Bill with his family and recently contacted Vicky Phelan and other advocates for the legislation to offer his support.

He does not agree with the argument that if the Bill is passed, people risk being coerced into making a decision whether to live or die. “At the end of the day it’s the person with cancer who has to live with cancer. It should be that person’s choice.”

If he lost the ability to walk and was in bed every day, he would want that choice, he adds. “The Bill is there to give people a more dignified end.”

Before his diagnosis, Mr Lynch said he had no spare time. “I was a total slave to my work. Cancer changed me totally, I have a different outlook on life. Money means nothing to me now because I can’t buy back my health. Every day I get up and move around without pain is a good day.”

Varadkar says cross-border travel may not be advised even when restrictions lift, sources say