Driverless shuttle takes to the streets of Dublin

The EZ10 Driverless Shuttle, built in France, was demoed in Dublin and has no steering wheel, no wing mirrors and of course no driver. 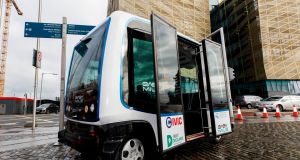 The EZ10 has no driver and travels at an easygoing top speed of 24km/h. Photograph: Andres Poveda 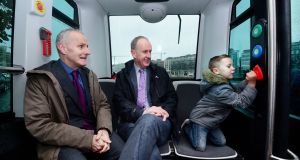 Ireland’s first driverless passenger-carrying vehicle has arrived on the streets of Dublin.

The EZ10 driverless shuttle, built in France, has no steering wheel, no wing mirrors and, of course, no driver.

It has a top speed of just 24 km/h, will win no awards for aesthetic design as it resembles a high-tech milk float, and it is powered entirely by electricity.

Its first public outing involved it trundling up and down a section of the Dublin docklands opposite the Convention Centre on Friday. The public will get a chance to glimpse the future when it takes passengers on Saturday and Sunday.

The shuttle is in Ireland as part of European Mobility Week, which ends on Sunday and is designed to promote modes of transport other than the private car.

The EZ10 has won the approval of Dublin City Council chief executive Owen Keegan, who has a well-documented dislike of private cars in the city centre.

While he forecast such driverless vehicles were “inevitable”, he acknowledged regulatory and technical issues would have to be dealt with first.

Mr Keegan said he was “pretty confident” that in “the next five to 10 years” driverless vehicles would “make a major contribution in terms of sustainable transport” on Dublin’s streets.

He was also convinced driverless vehicles could be safer than the alternative.

He envisaged such vehicles would work transporting people from bus and train stops to their eventual destination. “We are talking about the last mile. I think a fleet of semi-autonomous vehicles could make a major contribution.”

He said they would operate on the road in an environment where there would be “very few” single-occupancy cars on the streets of the capital in the future.

The EZ10 has already arrived in several cities across Europe. One operates in Paris, where it transports up to 15 people at a time from the Chateau de Vincennes metro station to Bois de Vincennes, the city’s largest public park.

In Sweden, the vehicles mix with other traffic in the new Stockholm suburb of Barkarby. In Frankfurt in Germany, they ferry students to and from the University of Frankfurt.

The EZ10 operates via GPS and artificial intelligence. It can read road signs and automatically brakes when in danger of a collision.

The vehicle is built by EasyMile, in Toulouse, and 100 are now in service.

“The idea is now that we are here, we really want to provide a service for Dublin. It could be at the university, the port or the airport. We want to showcase what we can do on the streets of Dublin.”

Mr Delbouys said most countries had to amend their legislation to allow for driverless cars and Ireland could follow France in that regard.