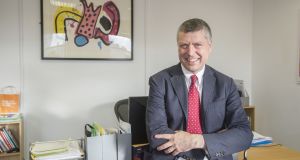 The Government has appointed Ciarán Devane as the new chairman of the Health Service Executive (HSE). He is chief executive of the British Council and former head of UK health charity Macmillan Cancer Support .

He was also a former member of the board of NHS (National Health Service) England.

The Department of Health said the appointment followed a campaign by the Public Appointments Service to identify potential candidates.

The Government decided last year to re-introduce a board to oversee the operations of the HSE.

The Department of Health said the early tasks for the new chairman would be to participate in the selection process for the new HSE chief executive which was currently underway.

It said he would also take part in the process to identify other members of the new HSE board.

The Department of Health said the move on Tuesday represented “another important step in the implementation of a key Sláintecare recommendation”. Sláintecare is the Government’s ten year plan for the health service.

It said priority issues for the new HSE board would include:

* delivering effective and safe services within the resources allocated

The Department of Health said the British Council, of which Mr Devane was chief executive, was a £1.2bn public body with 12,000 staff in 115 countries.

“He was chief executive of the UK health charity, Macmillan Cancer Support. He was knighted for his services to cancer patients. “