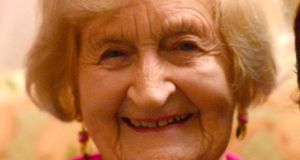 In isolation at home in Lucan awaiting a test for Covid-19 on March 28th, Elaine Hanley spoke briefly to her 90-year-old mother, Dorothy, by phone. “I love you, take care of yourself,” her mum said as they hung up. Little did Elaine know they would be the last words her mum would say to her.

Cocooning at her son John’s house in Dublin, Dorothy had severe cardiac pain the following day. She was brought to hospital where they tried to remove a blockage, but she did not survive. Due to Covid-19 restrictions, John could not travel with her in the ambulance, and the family were unable to visit her in hospital before she died on Sunday night.

“When I got the news about my mum, I couldn’t get a hug from my husband or my family,” says Elaine, who had spent a night in hospital earlier that week with breathing difficulties, suspected to be Coronavirus-related. “I really wanted to make sure they didn’t get it, so I stayed away.”

Just a few hours later, the mobile testing unit arrived at her door.

“I was swab tested at 1.30am by a paramedic that we now call our ‘Blue Angel’,” she says. “He was incredibly kind. He was so compassionate about the very recent death of my mother, and spent time talking to me about her.”

Dorothy Challans - known as Cee to her friends and family, after the name her brother called her when he was just three years old - was born in Saxilby in Lincolnshire in 1929. She became a nurse, and met Joe Hanley, a junior doctor from Castletownbere in Co Cork, while they were working together at a hospital in Lincoln. They married and moved to Germany, where their first two sons were born, before settling in Letterkenny in Donegal in 1960, where Joe was the county surgeon. They had six children - Michael, John, Nichola, Karena, Elaine and Donal.

As founder of the Flower Club, Dorothy travelled around the country giving demonstrations on flower arranging, “despite her innate shyness”. She was also involved in amateur drama, and loved driving - she even entered her Mini into a rally in Donegal while Elaine and her siblings were young. “She had a great spirit,” Elaine says.

As the rules around funeral attendance tightened last week, planning for Dorothy’s burial was extremely challenging for the family.

“My five siblings and I, spread between Donegal, Dublin, Wicklow and England, met by video conference for an hour every evening, talking through how we might make the ceremony as meaningful as possible,” Elaine says.

“Initially I hoped to be well enough to travel, but I knew it was unlikely.”

In the end, just two of Dorothy’s six children attended the funeral in person, as they decided together that respecting the travel restrictions was of vital importance. The rest joined the service by video link.

With florists closed, Karena gathered flowers from their mother’s garden to make a bouquet. Dorothy’s 21-year-old granddaughter Emily brought 17 roses to the graveside, one for each of her grandchildren.

“We felt part of it from afar, as we watched the dignified ceremony, listening to my niece read the prayer beautifully and the priest, a family friend sing Abide with Me,” Elaine says. “It helped me hugely to write a prayer for her goodbye, so that I could be present in another way. Friends around the world lit candles for my mum when she was being buried. We said goodbye to her on a cushion of care and support.”

Elaine says she wanted to share their family’s story, to give some comfort to other families who may be facing into similar circumstances over the coming weeks, and to highlight that, despite social distancing rules, it is still possible to have a meaningful goodbye.

“Overall, this would not have been what we would have planned for our mum, but it felt right in the circumstances. We felt that she would have been happy with what we could do, and all around us did everything they could to make it the best it could be,” she says.

“We missed the stories we would have heard at a wake, but exchanged them between us on the calls, and will have another chance to celebrate her life in a way that we would not normally have had such time to plan for, when we can prepare a memorial for her.”

Ten days after her test for Covid-19, Elaine has still not received her results, but says it is “likely” she had the virus. She “had all the classic symptoms”, and had to spend a night in hospital after experiencing breathing difficulties. Although she’s feeling well again, she’s still keeping her distance from her husband Mark and three children Maeve, Michèle and Joe.

“I am still staying apart from them 90 per cent of the time. I don’t want there to be any chance they could be sick,” she says.

Property market: Is now the time to buy?
4