Donnelly criticised over response to NI concerns about ‘Dublin Dodge’ 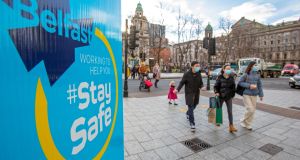 Pedestrians walk past Covid-19 informatin signs in Belfast over the weekend. Photograph: Getty

The Ulster Unionist Party leader Steve Aiken has called on Minister of Health Stephen Donnelly not to allow bureaucracy block the vital sharing of Covid-19 information.

The North’s health Minister Robin Swann raised a number of concerns with his counterpart in the Republic about the “Dublin Dodge”, whereby people can fly into Dublin Airport and then head across the Border without quarantining.

Mr Swann wrote a number of letters to Mr Donnelly complaining about the “dodge” but none of them received an official written answer.

In July, he wrote to Mr Donnelly saying that passengers travelling to Northern Ireland from high risk countries were obliged to complete passenger locator forms and observe 14 days of self-isolation. However, he said, this did not apply to passengers coming into Dublin Airport and then travelling to the North.

Mr Swann said the “logical solution” would be to ensure that all international travellers landing on the island provided data to both jurisdictions for Covid compliance purposes.

In two further letters Mr Swann said the discovery of a strain of Covid in mink farms in Denmark had further underlined the importance of sharing information.

The letters were obtained under Freedom of Information by Sinn Fein health spokesman David Cullinane, who said while Mr Donnelly had spoken to Mr Swann, it was surprising he had not formally responded by letter.

“Normally, if you receive a letter you respond by letter. It doesn’t suggest that the level of collaboration and cooperation that should be in place is in place,” said Mr Cullinane. “When you have a minister for health, and especially one from the unionist community who is reaching out, I think it’s important to respond.”

On Sunday, Mr Donnelly said he and Mr Swann had had numerous conversation about the issue “both in person and over the phone” although there was no written response.

He said the legal advice the Northern Executive had was that the data could be shared. “The legal advice we have unfortunately from our Attorney General in our jurisdiction is that it is not possible. So, we are still exploring it,” he told Newstalk’s On The Record show with Gavan Reilly.

Mr Donnelly said one possible way around the issue was through the European Union which was rolling out an electronic locator form. While Northern Ireland and Britain were quitting the European Union perhaps such a system could be used, he suggested. “Certainly from Ireland’s perspective and from my perspective, the more common our approach is on the island the better,” said Mr Donnelly.

Meanwhile, the North’s health department recorded 12 Covid-19 deaths over the weekend, taking the death toll since the start of the pandemic to 986.

Nine deaths were reported on Saturday and three on Sunday. There were 666 new cases confirmed over the two days, bringing the total to 52,175.

Hospital bed occupancy is at 93 per cent. Currently there are 414 patients receiving Covid treatment in Northern Ireland hospitals with 33 in intensive care and 29 of them on ventilators.

The overall seven-day Covid figure for Northern Ireland is 132 cases per 100,000 of population.