No need for strike by public health specialists, says Donnelly 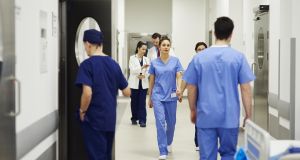 The Department of Health proposed to the Department of Public Expenditure that about 80 consultant posts in public health medicine be established and that these positions could be advertised early next year. File photograph: Getty

Minister for Health Stephen Donnelly has described plans by public health specialists to go on strike during the pandemic as regrettable and disappointing.

The public health specialists, who are members of the Irish Medical Organisation (IMO), voted by 94 per cent in a ballot finalised last Friday to take industrial action up to and including strikes. The Minister said he saw “no need” for the industrial action over pay and contracts.

The doctors are to meet on Monday to decide on the nature and timing of their industrial action.

Public health specialists earn about € 113,000. Hospital consultants with a type-A contract – which permits them to treat only public patients – have a pay scale at present that ranges from €141,026 to €195,653.

Mr Donnelly told RTÉ’s This Week programme on Sunday that he understood the frustration of the doctors. He said he had been in post for five months and had secured funding to double the public health workforce.

He said he had submitted a business case for a consultant contract for public health specialists which would give them the recognition they deserved and lead to a significant increase in salaries.

Mr Donnelly said the public health doctors had waited a long time but more progress had been made in five months since he was appointed than in many years.

The Department of Health proposed in its business case to the Department of Public Expenditure that about 80 consultant posts in public health medicine be established and that these positions could be advertised early next year.

It has suggested that they could receive a salary of between €189,000 and €227,000 – along the lines of that proposed for a new-style hospital contract for doctors who treat only public patients.

It is understood the public health doctors are concerned Government proposals may not mean all existing public health specialists automatically upgraded to consultant positions, but instead have them compete for posts as they come on stream