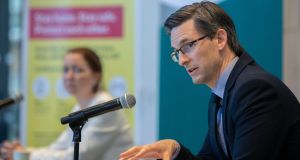 The number of female deaths from coronavirus has outnumbered male deaths for the first time,  public health officials have disclosed.

Four members of the Roma community diagnosed with Covid-19 have died, out of 22 hospitalised, while two prisoners have been hospitalised out of 19 cases in prisons up to last Sunday, according to deputy chief medical officer Dr Ronan Glynn.

Of the 828 cases in meat factories, Dr Glynn said, 16 people have been hospitalised. He said he was not aware of any other deaths in at-risk groups.

The deaths of another 11 patients with Covid-19 were reported by the National Public Health Emergency Team (NPHET) on Wednesday. There have now been a total of 1,571 Covid-19 related deaths in the Republic.

A total of 64 new laboratory confirmed cases of the disease was reported by NPHET at its daily briefing, bringing the total number of cases to 24,315. This is the fifth day in a row in which the daily case number has remained below 100.

Asked about calls for the reopening of schools to be considered, Dr Glynn said Ireland’s peak in cases occurred “quite a bit later” than in many other countries, some of which were now reopening schools or creches.

He added: “As things currently stand, we don’t envisage schools coming back before September.”

Asked about the absence at short notice of chief medical officer Dr Tony Holohan from Wednesday’s briefing, Dr Glynn said his colleague “will be back at work tomorrow morning as things stand”.

For the first time, the number of female deaths outnumbered male deaths - 786 against 785. Some 41 per cent of deaths were hospitalised and 4.8 per cent were admitted to ICU. The median age of deaths was 84 years and the mean age 82.

To date, 87 per cent of cases diagnosed with the disease have recovered, although some were living with the after-effects, according to officials.

“This is very positive news but should not deflect from the impact this disease has had on individuals and families. In addition, it does not change the risk for any one individual who is diagnosed with the disease today, or in the future,” said Dr Glynn.

An analysis of cases up to last Monday shows 57 per cent are female and 43 per cent male. A total of 7,708 (31.9 per cent) are associated with healthcare workers and the the median age of all cases is 48 years.

A total of 393 people have been admitted to ICU, of whom 53 people remain there. This is one more than the previous day.

There was a jump of 16 in the number of cases hospitalised, bringing that total to 321.

There are now 463 clusters of the disease in residential care facilities, up five in a day; 258 of these are in nursing homes, the same as the previous day.

Some 62.3 per cent of all deaths are associated with residential care settings; 54 per cent of deaths have occurred in nursing homes.

Dr Glynn said NPHET would continue to look at issues affecting children at its meetings on Friday and next week “to see if we can make things easier” for them.