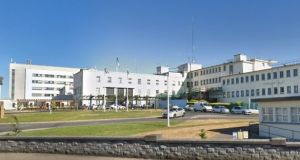 A report by the Health Information and Quality Authority has warned “immediate” action is necessary to tackle potentially significant infection-control risks in several hospitals around the country in the context of the Covid-19 pandemic.

The report, which was submitted last month to the National Public Health Emergency Team (NPHET), is particularly critical of the University of Limerick Hospital Group (ULHG) and the South Southwest Hospital Group (SSHG).

It warns that within the SSHG, recent issues identified at Cork University Hospital (CUH), University Hospital Waterford and “previously in Kerry point to the potential for underlying weaknesses in each of these infection and control programmes which could be re-exposed in a pandemic situation”.

It raises concerns around the demands that significant extra critical-care capacity might place on the group given staffing issues. This is especially the case in Cork University Hospital, at the Mercy Hospital in Cork and at South Tipperary given “a background of comparatively poor [availability of] speciality medical staffing” in infection control. At CUH, the report flagged concerns about “a level of inexperience within the infection-control nursing complement . . . which may likewise contribute to possible difficulties as the pandemic progresses”.

The watchdog “note[s] the relatively large number of critical care beds intended for the group in total relative to the overall level of infection-control resourcing which will result in challenges in the event of a surge” and recommends that further targeted supports should be explored.

Regarding ULHG, it warns that there was already a “potential for overcrowding pre-pandemic” on wards, while a self-assessment from the hospital “did not assure relating to a number of aspects of environmental or equipment cleaning”.

The report is based on a self-assessment tool distributed in April to hospitals around the State to gauge infection-control preparedness, which posed questions relating to best practice.

“[ULHG] were unable to provide an assurance relating to many of these questions,” it notes. “Similarly, the South Southwest group were unable to assure that they universally had mechanisms around cleaning specifications in place”.

“In the context of a pandemic situation, these findings in these groups in particular are of concern and require action in the short term to bridge these gaps.”

Many of these issues, the Hiqa report states, have been previously flagged through its inspection of these hospital groups. The report notes that while all other adult hospital groups reported receiving extra infection-control staff, ULHG said it had not.

While the risks are currently rated as moderate, the report finds that if there was a further surge in acute hospital activity, or if overcrowding increases, the issues in both ULHG and SSHG would become “significant” and therefore immediate mitigation is required.

The Hiqa report also raises a number of other issues, including concerns around pressures that several hospitals have on their microbiology and infectious-disease capacities, arising from an increase in critical care, with this “likely to be most acutely felt in the hospitals at Tullamore, Mullingar, Letterkenny, Naas, Ballinasloe, Wexford and Kerry.”

Concerns around the availability of alcohol hand gel were reported by most hospitals. While it notes that this has received less attention than issues around personal protective equipment (PPE), it “may equally require attention akin to that of PPE in terms of national co-ordination in a challenging global supply market”.

Many hospitals raised concerns about the availability of testing over a given four-week period due to limited availability of testing kits or reagent. “Were this ability to be disrupted, this would have significant implications on the ability and efficiency of hospitals to prevent or manage . . . outbreaks of Covid-19.” The Dublin Midlands and Ireland East hospital groups “reported a lack of assurance around access to testing”. Both groups clarified that access is available and capacity is increasing, but said they “would have preferred better levels of testing capacity”.

Notwithstanding the issues identified, the report found the majority of hospitals have appropriate and well-tested arrangements in place for the prevention and control of healthcare-associated infection.