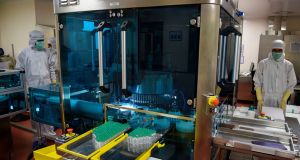 Pharmaceutical company AstraZeneca has informed EU countries there will be a delay on deliveries of its Covid-19 vaccine, according to European officials, a blow to vaccination efforts amid mounting pressure for an accelerated rollout.

Governments were informed of the delay in a meeting between member states and the European Commission to discuss the joint EU vaccination procurement programme.

“The company has confirmed its announcement in today’s steering board meeting with the member states, that there would be a change of its delivery schedule,” a European Commission spokesman said.

A spokeswoman for AstraZeneca said that “initial volumes will be lower than originally anticipated due to reduced yields at a manufacturing site within our European supply chain”.

“We will be supplying tens of millions of doses in February and March to the European Union, as we continue to ramp up production volumes,” the spokeswoman added.

The EU preordered 400 million doses of the two-dose vaccine developed with Oxford University last summer and several member states built their vaccination plans around it, as it is easier to roll out as it does not need to be deep frozen like the Pfizer vaccine.

Ireland had expected to receive 600,000 doses of the AstraZeneca vaccine in the first quarter of the year.

The AstraZeneca vaccine is already being given to patients in the United Kingdom, but has not yet been approved for use by medicines agencies either in the EU or the United States. The European Medicines Agency had been expected to approve the jabs this month.

Amid growing fears that new variants may fuel a fresh wave of infections before vaccines can be rolled out, the Baltic states, Austria, Denmark, the Czech Republic and Greece made a joint appeal on Friday to European institutions to speed up the approval process.

“Precision of procedures matters,” Lithuanian prime minister Ingrida Simonyte wrote on Twitter. “But so does speed. The delays cost lives.”