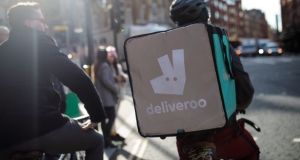 Deliveroo riders across Dublin withdrew their services temporarily on Friday evening in protest over their terms and conditions.

The company’s hundreds of riders across the capital are deemed to be self-employed individual contractors, rather than employees which means they do not have rights such as annual leave and sick pay.

In social media posts, the organisers of the protest - which began at 6pm and was scheduled to last for two hours - said their rates of pay had been “drastically reduced” last month which meant they now had to spend longer on the streets and “pedal more, to earn less”.

The organisers also highlighted the “lack of security” and the level of violence riders experience and said three couriers had been attacked this week alone.

Restaurants took to social media to show support for the riders.

The Korean restaurant Chimac Aungier Street said it would be shutting off its Deliveroo orders for the duration of the strike.

“These men and women have got us, and you, through the last 10 months of madness – they work incredibly hard and so often not treated with the respect they deserve,” the restaurant said.

The Vegan Sandwich Co said it fully supported the strike and would be “turning off our machine in solidarity between 6pm and 8pm this evening. These people are the backbone of the food industry and deserve better working conditions, better pay and more respect”.

In a statement, Deliveroo denied its riders were being paid less during the pandemic and insisted that rider pay was now higher than it was before March.

It said that its riders typically earned above the national minimum wage and had suggested that on average they earn €13 per hour at mealtimes, an amount that excluded additional tips they may receive.

It has also pointed to distance-based fees which sees riders earn more for medium and long distance deliveries.

A Deliveroo spokeswoman said the safety of riders was its “absolute priority”.

She said the company takes “every step to ensure they feel safe when on the road. We were the first delivery platform to give all riders free insurance to protect them in case something goes wrong while on the road, and we are constantly looking at new ways to extend our support”.

She said it planned to introduce free personal safety alarms for all riders in Ireland and said it worked “closely with the police and authorities to help protect riders and resolve any security issues they face, such as theft”.

She said there was “a dedicated rider team to help riders with any concerns that they may have and make sure they feel supported at all times”.

Deliveroo was founded by Will Shu in 2013 in London and operates in over 500 towns and cities across 12 markets.

It launched in Ireland in 2015, and currently works with more than 1,000 riders and over 1,800 restaurants across Dublin, Cork, Limerick and Galway.

Its Irish division recorded a 40 per cent rise in turnover last year as sales rose from €9.3 million to €13.8 million.

It has seen a huge jump in demand during the Covid crisis and in addition to delivering takeaways, it has also expanded into groceries though a partnership with Aldi, which helps it reach an estimated 1.5 million shoppers in the Republic.