Chair of national children’s hospital development board to step down 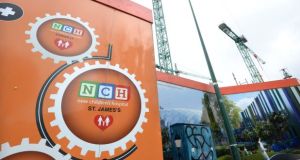 A view of the site of the new national children’s hospital. Photograph: Dara Mac Dónaill/ File

The chair of the board developing the national children’s hospital is to step down at the end of next month, The Irish Times has learned.

The resignation of Fred Barry, the highly-regarded chair of the National Paediatric Hospital Development Board (NPHDB), will come as another blow to the beleaguered hospital project.

Mr Barry, a former chair of the National Transport Authority and chief executive of the National Roads Authority, was brought in by former minister for health Simon Harris as costs at the project spiralled out of control, leading to political controversy in early 2019.

In a statement, a spokeswoman for the board said that it “can confirm that Fred Barry has informed the Minister for Health of his intention to resign as Chair of the Board of the NPHDB, effective from the end of February 2021.”

The €1.74 billion project has seen major conflict erupt in the last year between the board and BAM, the main contractor building out the scheme.

“The nature of this project demands a significant time commitment from all those involve -at Board and Executive level,” the spokeswoman said. “The NPHDB values the time that Fred has invested to date and respects the decision that he feels he cannot continue at the necessary level of involvement for the remainder of the time left on the project.”

In a statement, the board paid tribute to Mr Barry, saying that under his chairmanship “significant progress has been achieved”, with the outpatients and urgent care centre at Connolly Hospital opened in 2019 and another similar centre at Tallaght University Hospital set to open later this year.

“The National Paediatric Hospital Development Board would like to offer our thanks to Fred for his commitment and contribution over the past two years. The new children’s hospital project will be transformative for the healthcare of future generations of children, and all involved will look on it with pride for the rest of our lives.”

In a statement on Friday evening, Minister for Health Stephen Donnelly said: “I want to sincerely thank Mr Barry for his service and his contribution to advancing the new children’s hospital project over the past two years and I wish him every success in the future.

“The work of the board continues and I have asked officials to advise me on the process for appointing a new chairperson.”