Naval Service will not participate in any new humanitarian operations 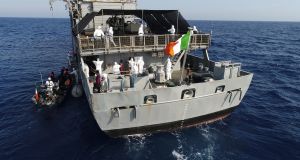 The announcement by Taoiseach Leo Varadkar that the Naval Service will not participate in any new humanitarian missions to the Mediterranean has been met with disappointment but not surprise by sailors.

Mr Varadkar said in the Dáil the Naval Service will instead be needed in Irish waters “to focus on our seas and on fishery protection and drug interdiction instead.”

It follows confirmation that three of the service’s nine vessels have been withdrawn from operations, including its flagship the LÉ Eithne.

The LÉ Eithne and the LÉ Orla have been withdrawn indefinitely due to a lack of personnel. It is estimated that it will take up to 18 months to train new crews but with the recruitment and retention crisis deepening, many naval officers believe they will never sail again.

The third ship, the LÉ Róisín, is undergoing a planned midlife refit and will be out of service until next year, leaving the Naval Service reduced by a third.

Irish involvement in the EU-led Operation Sophia, to rescue migrants attempting to enter Europe and discourage human trafficking, ceased in March when the naval aspect of the operation was wound up. This followed a decision of Italy’s partly far-right government to refuse ships permission to land rescued migrants there.

There had also been a significant decrease in the numbers attempting to cross the Mediterranean since the refugee crisis began in 2015.

The operation continues but is restricted to air patrols and facilitating and training the Libyan authorities to stop people smuggling. No Irish Defence Forces personnel are involved.

At the time of the decision last March, one of the mothballed ships, the LÉ Eithne was preparing to sail to the Mediterranean with a crew of about 60. It had been the first ship to set sail for the Mediterranean when the operation began in 2017.

Although no new naval operations are planned for the Mediterranean by Ireland or the EU, this might change if the migrant crisis worsens or if there is a change of government in Italy.

Part of the Naval Service’s planning had anticipated a resumption of rescue missions in the medium term, according to informed sources.

Military sources said the Naval Service would be able to assist in any new operation with its reduced compliment of ships but it would leave holes in patrols of Irish waters and a reduced fishery patrol and drug interdiction capacity.

The missions to the Mediterranean were extremely popular among Irish Naval Service members. Missions were two months long and participants received an additional tax-free allowance of about €70 a day while aboard.

They were also seen by Defence Forces management as vital to providing experience to sailors who do no usually take part in international missions.

“They were interesting but less gruelling than peacekeeping missions undertaken by the army as they were much shorter,” a military source said. “More than that, they gave sailors a sense of purpose. They’re not just counting fish.

“This is why they sign up. There was no shortage of volunteers.”

Defence Forces personnel rescued some 18,000 migrants since 2015, either pulling people from the sea or taking them off small boats, which were often close to capsizing having been towed into open water and abandoned by smugglers.