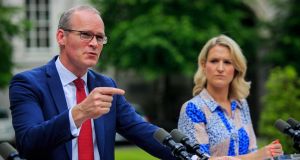 The Brexit planning document published by the Government on Tuesday is reminiscent of the warnings about the Irish economy and housing market that proliferated in the first phase of the economic crash a decade ago.

It is one of the most alarming documents ever published by an Irish government.

It warns of “profound implications for Ireland on all levels” elaborating that they involve “severe macroeconomic, trade and sectoral challenges both in the immediate term and in the longer term”.

It warns darkly of “difficult and significant choices of a practical, strategic and political nature”.

And even though it puts the best gloss possible on the intensive preparations the civil service has been making for Brexit, it acknowledges that even so, there will be significant damage North and South if a no-deal Brexit occurs.

“A no-deal Brexit will be highly disruptive and will have profound political, economic and legal implications, first and foremost for the UK, including most significantly Northern Ireland, as well as having significant impacts on Ireland and the rest of the EU,” it says. Written in low-key officialise, it is a sobering read.

“The truth is we will need to take some action somewhere in our economy to ensure that we are protecting the integrity of the products that are then going to be sold on off Ireland,” Mr Coveney said.

Translation: there may have to be checks on important imports from the North after all. But not, he insisted, on the Border. But somewhere else?

Yes. The publication of the document marked the extent to which reality is intruding on the Government’s Brexit game plan.

If the British government has long promised two things which are, on the face of it, mutually exclusive – ie, leaving the single market and customs union while having no disruption to trade on the Border – the Irish Government has been guilty of something similar: promising to protect the single market while insisting there would be no Border checks.

On Tuesday that position was refined in a subtle but important way: the Government admitted that there will have to be checks, but insists that it will not take place on the Border. But if not on the Border – then where? That is the question that now moves centre stage in the Government’s Brexit planning.

Discussions continue with the European Commission on how to “protect the single market”. But it is clear that something important has shifted in that conversation.

The previous assurances – how many times have you heard the Taoiseach or Tánaiste say “There will be no physical infrastructure or related checks or controls” – are no longer quite the full picture. The Government has relished wearing the green jersey on Brexit and standing up to the British with the help of the EU, and has been aware of the political benefits of doing so. But now the pitfalls begin to emerge from the fog.

Varadkar and Coveney have often said there is no such thing as a good Brexit for Ireland. That may be true also for the Government. Government Ministers and officials are at pains to point out that this isn’t their fault; the hardening of the British position has outflanked the careful compromises and delicate architecture of the withdrawal agreement and its backstop. And they’re right.

The British, for their part, say that they won’t put up a border, no matter what. If the Irish and the EU want one, that’s their business. An emerging blame game is already in evidence.

There’s another question that will surface too. Once the new British government takes office, the focus will shift to the backstop, which remains the biggest obstacle to the acceptance of the withdrawal agreement by the House of Commons.

If a concession on the backstop materialises – perhaps a time-limiting protocol; a legal codicil which specifies a review in the absence of agreement; something, anything to give the new prime minster an opportunity to bring the withdrawal agreement back to the House of Commons – then there will surely be intense pressure on the Irish Government to accept it.

After all, isn’t the possibility of Border checks in a few year’s time better than the certainty of checks on October 31st?

Taoiseach Leo Varadkar has previously insisted that this has to be settled now. But does it really? Varadkar may find he has to make the case for not kicking the can down the road. Politicians usually find themselves making the opposite argument.

That is the next phase. After the summer interlude and the change of government in the UK, Brexit will become centre stage in Irish politics once again.

Cork shootings: Father and sons to be buried in two separate funerals 10:31
Flood risk in Connacht and Munster as wind warning issued for Galway, Mayo 09:03
HSE waiting for department sanction to resume PPE purchases 06:48
Covid-19 is not a matter of opinion or politics 06:00
Shocked locals hold vigil for mother and children found dead in Ballinteer 03:38