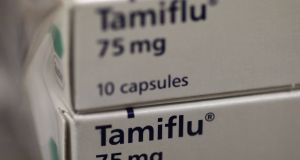 ‘Stocks of Tamiflu have been tested for viability and have been found to be still viable for possible use in the event of a pandemic,’ says HSE. Photograph: Reuters/Ruben Sprich

Out-of-date antiviral drugs costing more than €27 million, purchased mainly to combat flu outbreaks, have been stockpiled by the health service, an internal audit has revealed.

Despite being 13 years old, the Health Service Executive says the drugs are still viable and could still be needed in the event of a flu pandemic.

Large quantities of Tamiflu and Relenza had not been disposed of or written off because it required “high level approval” given the value of the drugs, according to a HSE warehouse manager interviewed for the audit.

It also said a procurement process was needed to identify a company to dispose of the drugs.

The audit report said retaining €27.2 million in out-of-date drug stocks required that they were properly disposed of.

Billions have been spent worldwide on purchasing antiviral drugs since the influenza pandemics of the late 1990s. Tamiflu and Relenza are thought to prevent and treat sudden influenza outbreaks, although they can be used for seasonal influenza as well.

The US Center for Disease Control (CDC) recommends countries stockpile the drugs, though research has cast doubt on their effectiveness. A 2014 study claimed the drugs reduced the duration of symptoms by about half a day, but did not reduce hospital admissions or serious complications.

A spokeswoman for the HSE said the drugs were part of the State’s strategic stockpile for public health emergencies and were only for use in a pandemic. She said they were initially bought in 2006 with a shelf life of seven years, which was later extended to 10 years by the manufacturer.

“The stocks of Tamiflu have been tested for viability and have been found to be still viable for possible use in the event of a pandemic,” she said. “The Department of Health recently held a meeting to discuss current stocks of these antivirals and a process is being initiated which will examine antiviral requirements in the event of a future pandemic.”

The spokeswoman added that the efficacy of the antivirals was “not 100 per cent”.

Cillian De Gascún, consultant virologist and laboratory director at University College Dublin’s national virus reference laboratory, said there was considerable controversy around whether the drugs were effective at preventing and treating influenza. He said stockpiling antivirals was thought to be good practice “just in case” but the evidence of their effectiveness was mostly observational as opposed to randomised controlled trials.

“They are by no means the perfect drugs but they are the best we have,” he said. “It would be remiss of us not to have a stockpile.”