Phil Hogan has played a good hand in Brussels 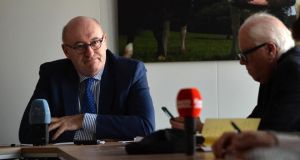 Besides agriculture, Phil Hogan has been an influential figure within the commission in articulating Ireland’s case on Brexit. Photograph: Ray Ryan

Guenther Oettinger has an impossible task as budget commissioner, it is being said, as he tries to frame a new European Union between 2021 and 2027 in a world where the UK has left, along with its €12 billion to the Brussels budget.

EU leaders demand new money for migrants, fighting climate change, science, defence. The circle will not be squared, particularly as the Common Agriculture Policy (CAP) continues to eat up 40 per cent of the budget, or €59 billion a year.

Agriculture was an easy and obvious target for major cuts in Oettinger’s original plan. However, Ireland’s agriculture commissioner, Phil Hogan was having none of it.

By the time the Oettinger budget was published, Brussels insiders were amazed to see that Hogan had bargained, cajoled, lobbied to the point that the proposed CAP budget was very largely intact, facing cuts of only five per cent.

Though Hogan has his critics, the outcome of budget negotiations is the most substantial legacy of the Kilkenny man’s first term as commissioner. A “minor miracle, 96 per cent of the budget intact” Hogan says, with a satisfied grin.

He says that he is “deeply honoured” to have been renominated by the Government, despite the criticism he has faced from some Irish farmers in the wake of the Mercosur trade deal.

Besides agriculture, Hogan has been an influential figure within the commission in articulating Ireland’s case on Brexit – and is highly thought of by the commission’s president Jean Claude Juncker.

Equally, he is held in high regard by the all-powerful secretary general of the commission Martyn Selmayr. Unlike Juncker, Selmayr remains a key player. Unlike some people, Hogan got things done, Selmayr once told an Irish official.

“Phil and I have had a very good close working relationship. I have always appreciated his help and advice especially when it comes to Brexit,” Barnier said last night. “He is highly respected throughout all EU institutions.”

Sometimes, Hogan has been the semi-official public face of the commission on Brexit, articulating more bluntly arguments about British policy and its leaders that Juncker could not make publicly.

Most recently, he has been vocal about the threat of a no-deal Brexit, though he continues to insist that border custom posts can be avoided even though Ireland must protect the integrity of the EU single market.

“We have in place plans which would not require physical infrastructure on the Border and we are not contemplating a hard border or a hard Brexit,” Hogan, a former Fine Gael minister, has declared.

Despite the flak he has faced from Irish farmers over the recently-agreed Mercosur trade deal, Hogan’s reappointment was welcomed by Liam MacHale of the Irish Farmers’ Association.

Farming organisations across the EU, said MacHale, had reacted “very positively to the news” about Hogan’s nomination, who is regarded as enormously accessible by farmers and enjoys warm relations with EU agriculture ministers.

However, Hogan has been scathing about farmers’ fears about the Latin/American Mercosur trade deal, describing them as “a diet of misinformation and inaccurate facts”.

The Mercosur deal meets “well-founded” concerns about the future of the Amazon rain forest and climate change, and places obligations, too, on Brazil, Argentina, Paraguay and Uruguay to honour the Paris climate agreement

“There is a commitment to the reforestation of 5 million hectares in the Amazon basin. Now I did not hear anyone talking about these. The deal is worthwhile economically and environmentally,” Hogan told The Irish Times.

The Mercosur countries will be able to export 99,000 more tonnes of beef to the EU, if the deal comes into force. However, Hogan points out that they have exported 247,000 tonnes to the EU for the last 15-20 years.

Nevertheless, in 2018 not a single South American steak entered Ireland, says Hogan. In the “unlikely event” that the deal produces “market distortions”, he says a €1 billion support package has been ring-fenced.

So far, it is not clear what job he will get. Such matters depend, he says, on talks between Taoiseach Leo Varadkar and the new commission president-designate, the German Ursula van der Leyen.

He will not express a preference, though it is believed he wants the much-coveted trade portfolio. His role on important trade negotiations, Mercosur, Canada, but notably the Japan agreement, is well-regarded.

In the latter he broke the log-jam near the end by offering soft cheese concessions to the Japanese. Important deals lie ahead, the US, Australia and New Zealand. In such times, the trade portfolio is a considerable prize.

During his time in Brussels since 2014, Hogan has been through two major dairy crises, but boasts that farmers have enjoyed relatively stable prices for an unusually prolonged period, thanks to CAP simplification.

He has promoted significant reforms, including protections for farmers from too-powerful retailers and reformed organic labelling. Equally, he has pushed efforts to develop new ties with Africa – a major ambition for Jean-Claude Juncker.

He established with his African Union counterpart a Task Force for Rural Africa, under the chairmanship of former Concern chief executive Tom Arnold to improve rural economies – efforts that are seen as a model.