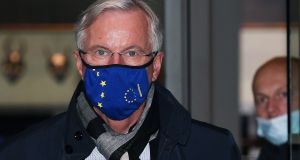 UK and European Union negotiators are locked in closed negotiations in Brussels this week as they push for a breakthrough to prevent a crash in trade relations in less than nine weeks’ time.

The teams – led by EU chief negotiator Michel Barnier and British counterpart David Frost – are expected to continue pushing for an accord into midweek, after an intense period of talks that indicate both sides wish to reach a deal.

A failure to clinch one would disrupt hundreds of billions of euro in trade and could poison EU-UK relations for years to come, while causing chaos at borders and delivering a further economic blow during a downturn due to the pandemic that is already historic in scale.

But differences remain between the two sides. From the outset, each side has struggled to accept basic premises of the other on matters such as which authority could decide disputes, and to what extent there could be common standards in the future to create even competition conditions for companies.

In recent weeks the issue of fishing rights has flared up and has threatened to become a major political stumbling block.

Though it represents a small proportion of the economy to each side, fishing is vital for coastal communities, is deeply politically sensitive and has led to bitter stand-offs in the past.

The UK has insisted that the Brexit vote should mean it grant access to the economic zone of the sea it controls based on annual negotiations, which fishing communities in Ireland, France, Spain and other EU countries fear could cut them off from grounds they have fished for centuries.

To bridge the gap, the negotiators have been working on a formula that could allow both the UK to declare it has won back its waters and the EU to say that no fishing rights have been signed away, potentially by cordoning off some the details for future discussions.

“Much remains to be done” to seal a deal, Mr Barnier said on Friday.

This week had been spoken about as the last moment in which a deal could be reached in time for it to be ratified and implemented by December 31st, after which trade terms between the UK and the EU will automatically change as the transition period comes to an end.

But it’s possible the talks could stretch on for longer. Over the weekend, French European affairs minister Clément Beaune indicated that negotiations could stretch into next week.

“I think an agreement is possible,” Mr Beaune said. “We have a few more days to find a solution, I hope we can reach it in the coming days, or two weeks.”