Humphreys encourages employees of multinationals to work from islands off coast 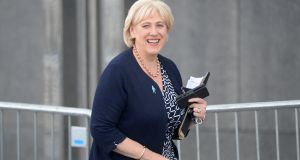 Remote working hubs specifically designed for public servants will be rolled out in rural towns across Ireland, Minister for Rural and Community Development Heather Humphreys has told the Dáil.

The Minister said the Covid-19 pandemic over the last seven months showed the significant opportunity to develop remote working faciliities that will allow people to work in their home area and provide rural towns with increased trade.

She is also encouraging remote working from islands off the coast and said there is no reason why people employed by multinationals could not live on an island and work from there.

Ms Humphreys was speaking as she answered a series of parliamentary questions about the development of remote working hubs where people could live near home in rural areas and work in shared facilities or hubs specifically kitted out with desks and ICT services and security, alongside employees of other companies or those running their own businesses.

In Budget 2021 €5 million was allocated for the development of remote hubs and Ms Humphreys said “I am very keen to have the hubs in the middle of towns because it revitalises them. If a community centre needs to buy a desk or kit itself out, that will not be a problem; that is what the money is for.”

There are an estimated 350 remote hubs across the country and the State is working to develop broadband network connections.

Fianna Fail TD Eamon O Cuív pointed to the need for a new form of decentralisation of Government departments.

He suggested there could be Civil Service offices, including in premises owned by the State, where people from different Departments could work and be overseen by a principal officer.

“People all over the country could work remotely near where they wanted to live,” he said adding that underutilised OPW properties could be used.

Ms Humphreys said there will be a focus on remote co-working through the rural development plan.

She has discussed the creation of remote co-working facilities for public servants with Minister for Public Expenditure and Reform Michael McGrath.

“Public servants could have the contact they need,” and “it would also encourage creativity and connectivity between different Departments and ideas could thrive”.

She said remote working could transform rural Ireland, allowing people to pursue careers in good quality jobs in their home place and provide increased trade for local businesses and to revitalise our rural towns.

Ms Humphreys said €5 million was allocated in Budget 2021 to develop a national network and upgrade existing facilities and broadband connection points with 200 to be rolled out by the end of 2020 and a further 100 in the first half of next year.

Sinn Féin community and rural affairs spokeswoman Claire Kerrane pointed to a report last month showing that over 40,000 private sector workers in the west and north west alone will be in a position to work remotely.

Ms Kerrane pointed to Arranmore Island off the west coast which has a new digital hub, the first to be established on an island off the coast. She called for the rollout of similar facilities on other islands.

The Minister said she wanted to see much more focus on the islands, adding that employees working for multinationals could easily live on an island while working for their company remotely.

Ms Humphreys said a strategy group had begun meeting and was engaged in research on the area and would report to her quickly. One of its tasks is to map existing hubs and networks across the country and they estimate that there are about 350 currently operating.