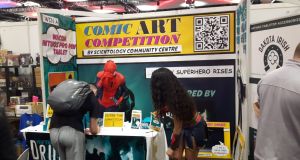 An anti-cult activist has criticised the presence of the Scientology organisation at a comic convention in Dublin.

The Scientology community centre in Firhouse had a stand at the Dublin Comic Con: Summer Edition in the Convention Centre Dublin over the weekend.

Two volunteers from the centre handed out leaflets about a comic art competition the Scientologists are running.

Young people were encouraged to enter a competition “for artists to create an Irish drug-free superhero”. The volunteers took the names of attendees visiting the stand, their ages and email addresses.

Dublin Comic Con, which is now in its seventh year, is hugely popular among young people in particular and attracts 20,000 visitors over two days.

This year’s event included The Hulk from the 70s TV series, Lou Ferrigno, actress Cordelia Chase who played Charisma Carpenter in Buffy the Vampire Slayer and Pom Klementieff from Guardians of the Galaxy 2.

Dialogue Ireland Trust director Mike Garde said the event organisers may have unwittingly given a stand to what he described as a “very dangerous organisation”.

“The Scientology model is to infiltrate every single area of life,” he said. “ If you question them, they act like they don’t know what you are talking about.

“The ordinary punter goes to their stand thinking it is a comic thing. They don’t actually realise they are giving their name to the Scientologists.”

Scientology has been accused of operating like a cult, by separating members from their families and demanding large sums of money from its followers.

Its volunteers at Dublin Comic Con distributed information packs entitled “The Truth about Drugs” from the Foundation for a Drug-Free World, which is affiliated with the Church of Scientology.

Mr Garde said Scientology often operated behind various fronts and event organisers might not be fully aware of the reality of who they really are, although the Scientology stand at Dublin Comic Con was clearly marked as such.

The female volunteer at the Scientology stand handed out a press release to this reporter with a contact email and telephone number.

Dublin Comic Con did not respond to a request for a comment.

In a statement, Scientology community centre spokesperson Diana Stahl said their comic competition had been a “raving success” with some 150 entries.

She said the Church of Scientology had been campaigning against illegal drugs for decades.

“The purpose is to educate and hence empower people to make informed choices about drugs, no matter if they are Scientologists, Catholics, Muslims, religious at all, atheists, male, female, trans, asexual, foreign, local or actual superheros and unicorns.

“To all critics of this initiative, self proclaimed experts and general complainers I have one question: what did you do about the drug problem?”