‘He slid down the wall, blood coming from his head’: The first child killed in the Troubles 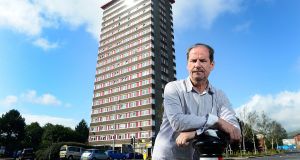 Con Rooney pictured at the Divis Tower, part of the Belfast estate where the Divis Flats stood. His brother Patrick was shot dead in their home in the flats on August 14th 1969 aged 9. Photograph: Arthur Allison/Pacemaker 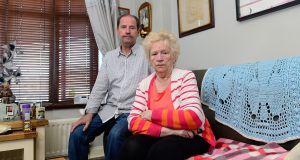 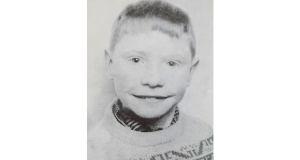 Patrick Rooney (9) was shot dead in his home in the Divis Flats. He was the first child to die in what would become known as the Troubles.

Eight-year-old Con Rooney was terrified. “You could see the flames and hear the crackling and the sky was lit up orange, and you think it’s the end of the world. I thought we were all going to be killed.”

On the night of August 14th, 1969 Con’s parents, Neely and Alice, gathered their six children into one room at the back of their home in Divis Flats in west Belfast.

Rioting had begun in Derry two days previously. An Apprentice Boys’ parade was the spark which lit simmering tensions, and the unrest spiralled into the so-called Battle of the Bogside as nationalist residents fought with stones and petrol bombs to keep the RUC and the auxiliary force, the B Specials, out of the area. On the afternoon of the 14th, British troops were deployed in Derry for the first time; they would arrive in Belfast the following day.

As the violence grew, Alice Rooney watched with increasing concern. “I’d come in from work and it came over the loudspeaker that people were to get out and support the people in Derry because there was trouble in Derry.”

Her husband, Neely, went to investigate. “He said, ‘I think it’s getting bad outside.’ Everyone thought they were shooting blanks, but Neely had been in the army years ago and he knew they weren’t blanks,” says Alice. “Then we saw the flames of the pub on fire in Dover Street. Everything was in flames.”

Seven people would die or be fatally wounded before the army’s deployment restored a temporary calm. According to the Scarman report into the disturbances, at least 745 people were injured. A total of 179 homes were demolished and about 1,800 families had to leave their homes; 1,500 of these were Catholic and 300 Protestant.

Some of the worst rioting was between the Catholic Falls and the Protestant Shankill. Streets regarded as Catholic were burned by loyalist mobs; a few members of the hitherto dormant IRA uncovered old guns and fired back. An RUC sergeant later told the Scarman inquiry that chaos “was reigning supreme”.

In Divis Flats, the Rooneys contemplated their escape. Neely Rooney tried to make it to his sister’s house; he later told his son Con he had tried to crawl along a wall, but the shooting was so heavy he had to turn back.

Alice woke the children. “I thought our flat was going to get burnt down,” says Con, “because people had been told to fill their baths and put any old rags or cloths in them in case the flats were hit.

“My granny lived in Conway Street and they had been burnt out, and that was what was going through my head.”

One of Con’s younger brothers, Felix, was crying; Alice remembers pulling him away from the front door. Suddenly, both she and her husband were hit.

“I saw all the flashes of the tracer bullets going past the flats, and as I opened the door, I must have been grazed with one of them.” Alice gestures towards her cheek.

“It was like a burning sensation. You couldn’t have gone outside.”

‘Bullets flying about’ The eldest of the Rooney children, nine-year-old Patrick, had been allowed to stay up late to watch a movie. “He was half-sleeping,” says Alice.

“You could see all of the bullets flying about the place,” says Con. “The next minute my daddy says to my mummy, ‘Alice, I’m shot’, and then Patrick slumped down the wall.”

“I said, ‘God, he’s fainted’, says Alice, “because he slid down the wall, but when I lifted him up the blood was coming from the back of his head.”

Con remembers his mother at the door, “screaming that her son had been shot, and we were all trying to drag her back in”.

Alice picked Patrick up and laid him on the bed. The family knelt around him, and began to pray.

Patrick Rooney was the first child to die in what would become known as the Troubles.

The bullet had been fired by the RUC, which had deployed three Shoreland armoured cars with heavy machine guns mounted on top of them following the death of Herbert Roy, who had been shot by the IRA.

‘No justification’ The Scarman report found that there had been no justification for the firing which killed Patrick. In 2016 the Police Ombudsman began an investigation and interviewed a former member of the RUC as part of that inquiry. It is understood a file is now with the North’s Public’s Prosecution Service, which is in the process of deciding whether a prosecution should be brought.

Con’s father blamed himself; he had wanted the family to emigrate to Australia. “He said we could all have been living on the Gold Coast,” says Con. “My daddy had lovely jet black hair, he loved his hair. He had these sideburns and a quiff in front and he was a real dapper when he went out. After Patrick was killed he went grey.”

Neely Rooney campaigned all his life on his son’s behalf, even giving interviews on his deathbed. “With me being the oldest now, my daddy asked me when he was dying would I take the case on,” says Con.

“Justice and compensation was what my daddy said,” says Con. “He wanted to know who fired the shots, why they fired them, things like that.

“You can’t forget about it. Of the [RUC men in the] three Shorelands who came in that night, I think there is only one still alive. So he’s probably in his 70s now, and people say sure he’s an old man, but I say: How would you like it if I shot your son and years later you found out it was me and I said, ‘Ah just forget about it, it happened so many years ago.’”

Alice is now 82; Con fears that she will not live to see any prosecution.

“It would be brilliant if we did have a case brought,” says Con, “to know that we beat the establishment and the truth is going to come out. It would be like the weight of the world lifting off your shoulders.

Dealing with the past This week a number of events will take place in Belfast and Derry to remember Patrick and the others who died between August 14th-16th 1969. On the evening of the 14th, a plaque will be unveiled in memory of Patrick and 20-year-old Hugh McCabe, who was also shot and killed by the RUC in Divis Flats; he was a Catholic soldier who was home on leave.

“Every time I go into town, I pass that spot and straight away a picture comes into my mind of those flats and the night it happened,” says Con. “It’s as sharp as ever, it hasn’t gone away, and then you see all the people on those tours standing there looking.”

The prosecution of former members of the security forces remains deeply controversial in Northern Ireland but Con says the past must be addressed.

“If we don’t deal with it, it’s just going to keep on and on.

“After all, their prime minister Margaret Thatcher said, ‘Murder is murder, is murder.’ They should be prosecuted.

“We weren’t brought up bitter. My mummy always said, they’re somebody’s sons and daughters, and it was a terrible war. Protestants and Catholics, both sides suffered.

“There does need to be reconciliation on both sides and the truth needs to come out. The politicians need to get back to Stormont, otherwise I think there’ll be direct rule, so they need to get back and get this sorted for the victims.

“When you look at it, I think everybody was a victim.”