Exemption from Irish to be made easier, education sources say 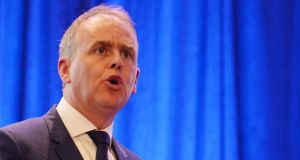 Minister for Education Joe McHugh: under the new rules students will be granted an exemption from the study of Irish “only in rare and exceptional circumstances”. Photograph: Alan Betson

Pupils will be able to secure exemptions from the study of Irish without requiring psychologists’ reports under new changes being introduced from the start of the school year.

It follows a Department of Education review which found evidence that the system was being “gamed”, with psychologists being placed under pressure by parents to give exemptions to students who did not qualify for the opt-out.

Under long-standing rules, Irish remains compulsory at primary and secondary school, but students are entitled to opt out if they have learning disabilities, special needs or have lived abroad for a long period.

The changes mean pupils applying for exemptions on the grounds of disability or special needs will no longer require a psychologist’s report to back up their claims that they face special barriers in studying the language.

Education sources say the changes will likely make it easier and more straightforward to secure exemptions and they expect numbers to rise.

This is because some parents and students, especially in the run-up to the Leaving Cert, feel exemptions allow weaker Irish students to focus on other subjects.

Some sources have also suggested that if there is significant growth in the number of exemptions it may trigger a new debate over the status of compulsory Irish.

In a statement, Minister for Education Joe McHugh said an overhaul of the system for granting exemptions from the study of Irish is long overdue.

“By making key changes, the system will be fairer and more supportive of students while at the same time ensuring that all children have equal access to study the Irish language,” he said.

He said that under the new rules students will be granted an exemption from the study of Irish “only in rare and exceptional circumstances”.

Under the changes, the new criteria will only apply in English-medium schools.

Students in special schools or special classes attached to mainstream schools will not be required to apply for an exemption.

Psychological assessments will no longer be necessary to process an application for an exemption.

Age-related criteria for decisions on exemptions are being changed from 11 years of age to 12, which brings the circular into line with the final year of primary education.

The decision to grant an exemption will continue to be made by the school principal.

Mr McHugh said, under the revised rules, the decision to exempt a child should only be taken following detailed discussion with the student’s parent or guardian, teacher, special education teachers and the student.

Following a public consultation earlier this year on draft revisions to the system, he said revised circulars for primary and post-primary schools will take effect for the 2019/2020 school year.

The public consultation on the issue of exemptions, which ran from December 2018 until January 2019, saw an unprecedented response with just over 11,000 individuals sharing their views.

The revised circular clarifies that an exemption may be granted in circumstances where students with significant learning difficulties have had access to a differentiated approach to language and literacy over time. In such instances, it says an application for exemption may be considered when a student has at least reached second class and at the time of the application for exemption presents with a standardised score on a discrete test in word reading or reading comprehension or spelling at or below the 10th percentile.

It states that a pupil’s IQ is no longer to be used as a diagnostic specifier. Based on the draft revised circulars, psychological assessments will no longer be necessary to process applications for exemption from the study of Irish.

The revised circulars make provision for the appeal of a school’s refusal to grant an exemption for the first time.