Social Democrats rule themselves out of FF-FG coalition government 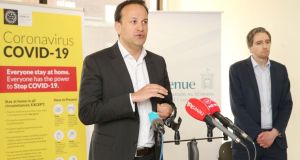 Taoiseach Leo Varadkar: Encouraging employers to take people off the pandemic payment and on to their books will be a key goal. Photograph: PA

The €350 weekly Covid-19 unemployment payment will come to an end before the Government scheme which helps companies pay the wages of their workers, Taoiseach Leo Varadkar has said.

Mr Varadkar said the intention would also be to withdraw the €350 unemployment payment if someone refused to go back to work if a job was offered to them.

The Government introduced two schemes to help people and businesses through the crisis: the €350 welfare payment and the wage support scheme which sees the State generally pay up to 70 per cent of wages of affected employees up to certain limits.

Both were initially due to last three months but Mr Varadkar and Minister for Finance Paschal Donohoe have said they will be extended but may be amended.

The UK government earlier this week said it was extending a similar scheme to October.

Mr Varadkar was speaking as talks on government formation between Fine Gael, Fianna Fáil and the Green Party turned to budgetary affairs on Wednesday.

The Taoiseach confirmed that the State would “probably” borrow €30 billion this year, which was at the outer limits of the Government’s worst case scenario calculations less than a month ago.

The Stability Programme Update in mid-April said the deficit would be €23 billion, but Mr Donohoe said this could rise to €30 billion if economic recovery was delayed.

Numerous Government figures, as well as those involved in coalition talks, said a deficit of €30 billion was now the likeliest scenario.

Meanwhile, the Social Democrats on Wednesday night ruled themselves out of entering government with Fianna Fáil and Fine Gael, saying any such deal would amount to “business as usual”.

In a letter to the two larger parties, co-leaders Róisín Shortall and Catherine Murphy argued high-quality public investment would require “significant investment”. The said answers supplied by Fianna Fáil and Fine Gael to a series of questions they submitted “don’t add up”.

“We are strongly of the view that trying to continue on with more of the same and a business as usual approach will inevitably be damaging to the vast majority of ordinary households in Ireland,” said Ms Shortall.

Ms Murphy said: “We we have, as a party, taken the decision to disengage from the process and instead commit to participating in the next Dáil as a constructive opposition party.”

Earlier, Mr Varadkar told the Dermot and Dave show on Today FM: “There are examples of people who are actually getting more on the pandemic unemployment payment than they got when they were working part-time. Some employers are telling us they are finding it hard to recruit and get people back to work because of that.

“So when you are offered your job back, if you refuse it you actually lose your pandemic unemployment payment but your employer will be able to take you back on the wage subsidy scheme.”

The Government is also to examine a range of new supports for the jobs market as the pandemic unemployment payment and temporary wage subsidy schemes start to wind down.

Encouraging employers to take people off the pandemic payment and on to their books will be a key goal. It is expected that an extension of a current short-time working scheme will be considered as part of this.

Currently designed to support employees put on short-time work, it may be refocused to apply when an employer takes on someone from the Live Register or the pandemic payment scheme on a part-time basis initially.

This recognises that in some cases as the economy restarts, the company may not initially be able to afford to pay full-time wages, meaning the employee would receive top-up State payments for a period.