Martin Wolf: For future historians the German ruling on ECB may be a decisive turning point in Europe’s history 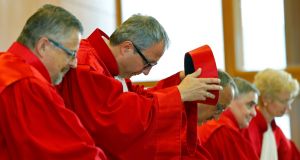 The 75th anniversary of the defeat of Nazi Germany was May 8. The 70th anniversary of the Schuman declaration, which launched postwar European integration, was May 9th. Just days before both, the German constitutional court launched a legal missile into the heart of the EU. Its judgment is extraordinary. It is an attack on basic economics, the central bank’s integrity, its independence and the legal order of the EU.

The court ruled against the ECB’s public sector purchase programme, launched in 2015. It did not argue that the ECB had improperly engaged in monetary financing, but rather that it had failed to apply a “proportionality” analysis, when assessing the impact of its policies, on a litany of conservative concerns: “public debt, personal savings, pension and retirement schemes, real estate prices and the keeping afloat of economically unviable companies”.

Monetary policies are necessarily economic policies. But the ECB’s policies, including asset purchases, are justified by the fact that it was - and is - failing to achieve its treaty-mandated “primary objective”, which is “price stability” defined as inflation “below, but close to, 2 per cent over the medium-term”. The EU treaty says other considerations are secondary.

The court also decreed that “German constitutional organs and administrative bodies”, including the Bundesbank, may not participate in ultra vires acts (those outside one’s legal authority). Thus, the Bundesbank may not continue to participate in the ECB’s asset purchase programmes, until the ECB has conducted a “proportionality assessment” satisfactory to the court.

Yet the EU treaty states that “neither the ECB, nor a national central bank...shall seek or take instructions...from any government of a member state or from any other body.” The court’s instruction puts the Bundesbank into a conflict of laws.

Courts in other member countries may see fit to decree that their national central banks cannot participate in policies they dislike. Pretty soon, the ECB will have been sliced and diced into a nullity.

The court is also assailing the right of the ECB to make its policy decisions independently. Germany fought hard to install central bank independence within the monetary union. Now, its constitutional court has decreed that unless the ECB satisfies the justices that it has taken full account of a highly political list of side-effects of monetary policies, asset purchases are impermissible. Courts in other member countries may see fit to decree that their national central banks cannot participate in policies they dislike. Pretty soon, the ECB will have been sliced and diced into a nullity.

Above all, the German court decreed that it can ignore an earlier ruling of the European Court of Justice in favour of the ECB, because the former “exceeds its judicial mandate...where an interpretation of the Treaties is not comprehensible and must thus be considered arbitrary from an objective perspective.” This is an act of judicial secession.

The EU is an integrated legal system, or it is nothing. It rests on the acceptance by all member states of its authority in areas of its competence. In a press release after the constitutional court’s judgment, the ECJ rightly responded that “the Court of Justice alone...has jurisdiction to rule that an act of an EU institution is contrary to EU law. Divergences between courts of the member states as to the validity of such acts would indeed be liable to place in jeopardy the unity of the EU legal order and to detract from legal certainty.” Imagine if the courts of every member state were able to decide that ECJ rulings were “arbitrary from an objective perspective”.

What are the implications? If the German court is ultimately satisfied that the ECB adequately assessed the economic impact of its purchases, the PSPP might continue. But the court has reduced the ECB’s future flexibility by limiting its holdings of any member country’s debt to 33 per cent of the outstanding total and insisting that asset purchases be allocated according to member states’ shares in the ECB.

A crisis might ultimately ensue, with devastating effects; perhaps even a break-up of the euro zone.

In the absence of other euro zone support programmes, the chance of defaults has jumped. Indeed, spreads on Italian government bonds have duly risen a little since the court’s announcement. A crisis might ultimately ensue, with devastating effects; perhaps even a break-up of the euro zone.

Others might follow Germany in rejecting the jurisdiction of the ECJ and EU. Hungary and Poland are obvious candidates. Future historians may mark this as the decisive turning point in Europe’s history, towards disintegration.

What can be done? The ECB cannot be accountable to a national court. But the Bundesbank could provide the court with the proportionality analysis. Maybe that would be enough, albeit also a bad precedent. Or, the decision could be ignored. If a German court can ignore the ECJ, maybe the Bundesbank can ignore that court. Alternatively, the ECB could just abandon efforts to rescue the eurozone and accept whatever outcome emerges.

The EU could initiate an infringement proceeding against Germany. But its direct target would be the German government, which is caught between the EU organs on the one hand and the court on the other. It could not change the ruling.

More radically, the EU could act to create the needed degree of fiscal solidarity. But the obstacles to this are large. A new treaty looks out of the question in today’s environment of intense mutual distrust. Finally, Germany could boldly secede from the eurozone. Yet, before it makes such a decision, one hopes it, too, will be required to do a full analysis of whether that would be “proportionate”.

One point is clear: The constitutional court has decreed that Germany, too, can take back control. As a result it has created a possibly insoluble crisis. – Copyright The Financial Times Limited 2020