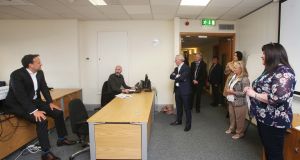 A new plan outlining how Ireland will achieve a 72-hour turnaround time for Covid-19 test results will be published by the Health Service Executive on Thursday, the Taoiseach has said.

This plan will contain a series of key performance indicators including the number of tests per week, the turnaround time for results and targets for contact tracing.

It comes after criticism of the relatively slow 9-day average turnaround time from a test being taken to results being returned to the patient. Most experts recommend a 72-hour timeframe.

Health chiefs have promised improvements to Ireland’s testing and tracing system and have highlighted a range of technical issues, including data entry errors, a lack of automation and systems that cannot interact with each other, which are delaying the issuing of results.

Some of these issues are as a result of the speed at which the system was set up.

Leo Varadkar accepted that some targets set by the State had not been met but said the HSE was now in a position to carry out 100,000 tests per week. The Taoiseach said he was confident the HSE could achieve a 72-hour turnaround time for test results.

“I absolutely accept criticisms from anyone that says we should have done that sooner but I can also guarantee that absolutely everyone across the system is pulling out all the stops to get to this point.”

“The target is absolutely to have a test result turnaround time of 72 hours, but it’ll never be 100 per cent you know. There isn’t a test that I’m aware of where you get the results within 72 hours 100 per cent of the time.”

He said the HSE had done a phenomenal job to go from zero to 100,000 per week in just a few weeks and said Ireland was now in the top tier for testing in Europe.

He said errors were occurring during manual processes, while data gaps had also slowed progress, including missing contact details for GPs or patients.

“They don’t all talk to each other . . . so that takes time to build into place and make sure it’s robust. We don’t have a unique patient identifier yet, we don’t have a national laboratory information management system.”

The HSE is hopeful of automating some processes by next Monday, including informing close contacts that they have been in touch with a confirmed case.

Dr Colm Henry, chief clinical officer at the HSE, said a “great majority” of people being referred for testing are swabbed within a day and a half. The median time between swabbing and contact tracing starting, he said, was at five days and coming down.

More complex cases, such as those involving healthcare workers who would be in contact with a large number of vulnerable people, or people who do not speak English, or in some cases have passed away, were also affecting turnaround times.

However, he could not indicate when the process will be completed within 72 hours, generally seen by experts as the upper limit by which the process should be completed.

A medium-term plan for a testing and contact tracing system is expected to cost about €500 million. This is in addition to the €1 billion annual bill for personal protective equipment in the HSE. Sources said the €500 million includes the cost of swabs for testing individuals and lab analysis. It is also likely to include costs of IT upgrades.

About 1,000 staff may be needed in the future to carry out tracing. At present Defence Forces personnel and Revenue Commissioners staff are involved. Sources said at some stage they would return to their substantive roles, requiring new personnel to come in.

Last Sunday, head of the HSE Paul Reid said a “future model” of testing and tracing is needed, beyond the current “wartime model”. The Department of Health said on Tuesday night the HSE’s testing plan has been agreed by its board and implementation was under way.