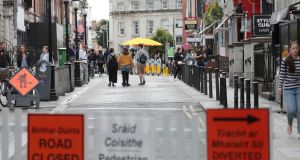 South William Street in Dublin which has been pedestrianised for the last three weekends. Photograph: Collins

Proposals for the permanent pedestrianisation of several streets around Grafton Street have had an “overwhelmingly positive” response following trials in recent weeks, Dublin City Council has said.

This weekend was to be the last weekend of the trial scheme, but the council said the scheme will continue for the remaining two weekends in August. There was clear desire for the measures to be made permanent, it added.

“We have received 1,010 responses to our online survey on the trials and feedback remains overwhelmingly positive with over 90 per cent of respondents in favour of pedestrianising these streets on a permanent basis.”

Footfall on Grafton Street and the surrounding area had fallen to 20 per cent of normal levels during the coronavirus lockdown. However, following the introduction of the pedestrianisation, footfall on the August bank holiday Saturday was higher this year than for the same Saturday in 2019, the council said.

From this week, parking spaces in several locations will be retained for tables and chairs on a seven-day basis, the council said.

Green Party councillor Michael Pidgeon said the reaction from businesses and the public to the trial was conclusive.

“The principle of pedestrianisation of these streets has been settled without question,” he said.

Some issues such as access for cyclists needed to be ironed out, but it was clear people found coming into town a “nicer experience” at the weekends. His fellow Green Party councillor Janet Horner said the trials had been invaluable in allaying any fears in relation to the pedestrianisation.

To facilitate safe cycling routes to schools the council is also installing a 3.5km segregated cycle lane along Griffith Avenue from Ballygall Road in Glasnevin to Malahide Road in Marino.

The route will act as a “main spine”, the council said, with extensions either side introduced over time to enable safe cycling to schools and colleges in the area, which includes Dublin City University. The route will include a contraflow cycle lane on the one-way section of Griffith Avenue at the Ballymun Road.

Contraflow cycle lanes will also be installed in the city centre on Parnell Square East, to link O’Connell Street to North Frederick Street, and on Werburgh Street in Christchurch.

Meanwhile, design work is continuing on the two-way cycle track for Strand Road in Sandymount, which will see the coastal road become one-way for cars.