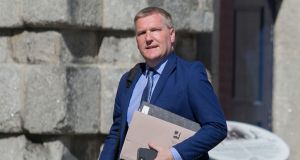 Minister for Public Expenditure and Reform Michael McGrath said the “next significant economic action from Government will be in the budget in October”. Photograph: Gareth Chaney/Collins

Minister for Public Expenditure Michael McGrath has warned there is a limit to the level of financial support that the State can provide for pandemic-related measures.

The Cabinet met on Friday and agreed on a package of economic supports for the three midlands counties in partial lockdown, including a 20 per cent top-up on existing restart grants. Fáilte Ireland will also spend €1 million promoting Kildare, Laois and Offaly when the restrictions lift.

County Kildare Chamber chief executive Allan Shine welcomed the package but said: “The harsh reality is that the package announced may only enable a certain amount of business to survive [and] we may require further stimulus package coming into to the winter months.”

Mr McGrath said the “next significant economic action from Government will be in the budget in October”.

And he said that the Covid-19 crisis “puts strain on the public finances but we are in an environment where we can borrow at low interest rates. That is not going to last indefinitely.”

Businesses had also called for the Government’s wage subsidy scheme to remain at its current level for a further three months for those counties but this was not included in the package of measures.

“Our view is that it is very difficult to make a distinction within the taxation system for the application of different schemes on a geographic basis,” Mr McGrath said.

There were also an expectation that the waiver on commercial rates would be extended beyond the end of September; however, this change was not introduced.

“That is something that will be kept under review for the three counties and for the remainder of the country,” the Minister added.

“So the current waiver is up to the end of September. It costs about €300 million per quarter, so it is something that we will keep under review but we are not making any changes as part of today’s announcement.”

Under the plan for the midlands, there will be a 20 per cent top-up to the existing business restart grant so the maximum a company can claim in these areas will now be €30,000.

There will also be €1 million made available for local enterprise officers to promote local schemes available for firms across the three counties.

It is also intended that these measures will be applied to other areas should they also have to enter partial lockdown.