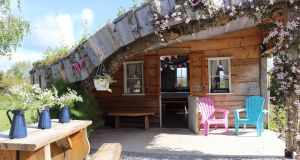 As many local businesses in Laois, Kildare and Offaly closed their doors again last week due to coronavirus restrictions, one Laois business saw an opening to meet the needs of the local community.

Glamping under the Stars, a boutique “glamp” site, is now providing local Laois residents with the opportunity to have a staycation without having to break any of the public health rules.

The business initially closed on Friday, August 7th, when the coronavirus restrictions were reintroduced in the county, which owner Kyra Fingleton said “felt like the end of the world”.

However, Ms Fingleton said after speaking to Fáilte Ireland and local representatives, she learned she could reopen at her own discretion as the campsite is largely outdoor based.

Within 24 hours, the full week and a half was booked out with local guests

“It was sort of an organic thing that just came about because of how events occurred. Friday night myself and my husband were here tearing our hair out, trying to contact guests and it was all about refunds and losses,” she said.

“Saturday morning from about 9 o’clock in the morning, the phone just rang and rang and rang with people from Laois saying ‘my holiday is cancelled, my kids are devastated, can I please come to you instead?’. There was such a volume of calls that I thought there has to be something in this. I don’t really see any logical reason why we couldn’t accommodate these people.”

Ms Fingleton said she didn’t want to break any rules, and was worried that reopening might not be permitted.

“We held off until we had that confirmation and [Fáilte Ireland] said that according to the way our site was laid out, it was at our discretion if we wanted to open. On that basis, and with the huge demand we were getting from people, we decided to go for it,” she added.

The local support has been “unprecedented”, as people opt to holiday in their own county, she said.

“Within 24 hours, the full week and a half was booked out with local guests. I’ve got a waiting list now for Laois people, it’s unprecedented,” she said.

“I’ve found that people have really enjoyed it and even people living virtually on our doorstep surprised themselves by how much the kids enjoyed it and will be back next year.”

The site has six self-catering accommodation units, each of which have their own private bathroom facilities as well as barbecue facilities. There are two acres of wildflower meadow, with paths mown for children to explore.

Ms Fingleton also provided each unit with their own chiminea stove and fire wood, since the communal campfire is not feasible under social distancing rules.

Asked if the local demand is enough for the business to break even this year, Ms Fingleton said it all depends on what happens next.

“When we had the two-week unexpected lockdown we thought we would have to close for that period but I suppose it’s great that we got bookings in from local people, so it has helped from a financial point of view. But it’s hard to know if it goes on much longer, are there enough people in Laois to sustain us?”