Coveney given car because of frequent visits to Belfast 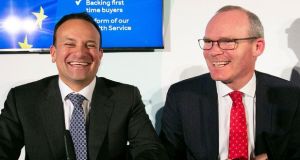 Outgoing taoiseach Leo Varadkar asked the Government Secretary General to contact the Department of Justice to inquire about retaining the State car.

The outgoing government argued Simon Coveney should keep his official ministerial car after stepping down as tánaiste because of his frequent visits to Northern Ireland as Minister for Foreign Affairs.

Mr Coveney travelled by car to the North 44 times in 2019 and while the number of trips will be less frequent this year because of the Covid-19 pandemic, Government sources said he travelled across the Border (mostly to Belfast) at least once – and sometimes twice – when the Dáil was in session.

It is understood that Mr Coveney himself made no request, formal or informal, to retain the car.

The Government is struggling to the finish line of a tumultuous Dáil term as it emerged on Wednesday that the Secretary General of the Department of the Taoiseach had approached his counterpart in the Department of Justice and asked him to contact the Garda Commissioner about a security detail for the former tánaiste. Under a 2011 agreement, Garda drivers are usually made available only to the Taoiseach, the Tánaiste and the Minister for Justice.

In the Dáil on Wednesday Labour leader Alan Kelly claimed Mr Coveney was using a State car and Garda drivers “without permission” because no Cabinet decision was made to approve the move. He said a Minister going around in a Garda car “costing €200,000 a year without permission” raised “serious questions”.

Before he became tánaiste Mr Coveney used his own car with civilian drivers. However, whenever he crossed the Border, he was required to change to an unmarked Garda vehicle driven by a Garda driver, which was then escorted by the Police Service of Northern Ireland to his destination.

Given the frequency of his travel to the North, it was argued that the practice of using his own car and swapping cars at the Border would not result in significant savings. Moreover, it would also have security implications, said the sources.

Separately, on Wednesday a review by the Department of Employment Affairs and Social Protection determined that 85 out of the 2,500 who had their pandemic unemployment payment stopped for leaving the country may in fact be entitled to it. The department said it would be contacting each of these individuals in the coming days.

The Government U-turned and said it would continue the payment for those who travelled to green list countries. Several sources insisted that Minister for Social Protection Heather Humphreys’ decision to change tack had been communicated to the Taoiseach, Micheál Martin, beforehand. However, the fallout from the controversy continued.