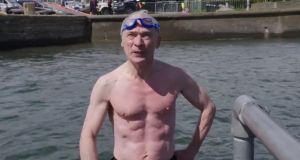 Panto season already in the Convention Centre and the Wednesday matinee is in full swing.

Mary Lou McDonald, Sinn Féin’s Principal Boy, strides onstage in a glitzy blizzard of big polka-dots. Slapping her thigh, she stomps to a stop and glares at the Taoiseach, chief bottlewasher among the Coalition’s Three Ugly Misters (Martin, Varadkar and Ryan).

“Having issued inconsistent and confused travel advice, you now say that workers on a Covid payment can’t take a holiday - a holiday that they may have paid for 12 months ago, a holiday, perhaps, to one of your ‘green list’ countries,” she cries.

O-oh! Mary Lou doesn’t know about the U-turn. But she keeps going.

The workers “can’t do those things without fear of losing their income” she choruses, upping the volume.

A familiar sing-song voice rises up from the Grand Circle.

For it is Monaghan’s Heather Humphreys, aka the Sugar Plum Farney (a GAA county gag there for sports fans in the audience). Ten minutes earlier, she waved her magic wand out of the blue in the near-empty theatre and banished the Pandemic PUP clause Mary Lou was fulminating about.

But Sinn Féin’s Principal Boy wasn’t there to see it so is none the wiser.

She waxes on about the disgraceful treatment of the poor Covid travellers. “The billionaire classes and tax exiles have been accommodated - no penalty for them, not a chance. They have been facilitated. The Government’s utter hypocrisy and unfairness is galling,” she roars, slapping her thigh again.

Micheál Martin simmers inside his paper fortress of files in front of the proscenium arch. If he had a moustache he’d be twiddling it. Just wait until he gets the chance to triumphantly tell her that the evil PUP restriction is no more.

Micheál must have been laughing inside, although he didn’t show it.

She sashays off to frown from the wings.

“Deputy McDonald loves throwing accusations about the place and making assertions about this government’s overall policy” he declaims, embarking on a lengthy monologue. He talks tantalizingly about everything but the glaringly obvious: the fact that the PUP regulation Mary Lou is complaining about about has already been dropped. End of.

Little eyes widened in the audience. Was there a twist in this panto plot? Could it be that Micheál Martin didn’t know either about the sudden U-turn on withholding the Pandemic Unemployment Payment from recipients going abroad for a few days?

He was probably on his way to the auditorium when the Sugar Plum Farney quietly confessed during the dead zone of Ministerial Questions that her department was shelving the controversial clause.

“Cathaoirleach,” she ventured sweetly, “I was wondering if you’d mind terribly if I made a short statement to the House?” That’s how it happened.

When the Taoiseach didn’t immediately put Mary Lou right on the current state of play, people began wondering if the decision to drop the measure was made by a Fine Gael Social Welfare Minister on a solo run without alerting the Fianna Fáil chief bottle washer. He certainly seemed unaware of it.

Monaghan’s Sugar Plum Farney, was sitting directly behind him. Expressionless. Didn’t even pass across a note to jog his memory about her surreptitiously changing tack before he arrived in.

But Micheál never once acknowledged the axing of the PUP travel clause despite Mary Lou building her questions around it.

It’s such a happy ship.

If Fianna Fáil was the culprit, then it follows that the party leader must have been aware of the PUP rowback. If so, the Taoiseach is quite the actor. He gave no indication, ten minutes after Heather’s Dáil statement, that he knew anything. By loftily talking around it and singing the praises of the PUP scheme, he managed to avoid all embarrassing talk of U-turns.

The panto went up a gear in the final act with the arrival of thigh slapping crowd pleaser Alan Kelly, melodrama king of the new Dáil.

He thrilled the audience with a suggestion that former tánaiste Simon Coveney is driving around town in a swanky car on a politically provisional licence.

Simon didn’t put in an appearance, although he is treading the boards these days with Leo Varadkar as one part of popular panto duo, The Grandiosity Brothers. Leo also moonlights with Micheál and Eamon as one of the Three Ugly Misters.

Audiences find their act hilarious – Varadkar walks everywhere with a uniformed military attaché who wears a wide gold sash across his chest and carries a swagger stick while Coveney cruises around in an enormous Cuban style sedan with two liveried drivers up front. Some of his Fine Gael colleagues find this rib-splitting because Simon pioneered the abolition of State cars and drivers. The gardaí were very annoyed at the time.

But back to Alan Kelly, who wondered aloud about Coveney’s mode of ministerial transport and why he has been given a State car and drivers when Government policy is that only the Taoiseach, Tánaiste and Minister for Justice are entitled to that privilege.

The decision to give out the extra car didn’t happen on his watch, insisted Micheál, washing his hands of the matter. It’s a security matter and he isn’t going to question it.

The last minister for foreign affairs was Fine Gael’s Charlie Flanagan, who supplied his own car and had a civilian driver. But then, Charlie is from landlocked Laois and is not a merchant prince from Cork. The nearest Charlie will ever get to a yacht is a boat on the Mountmellick canal.

As for security concerns, there are unsubstantiated rumours that Jerry “Butsy” Buttimer has put a price on Coveney’s head in a last ditch attempt to snaffle the Fine Gael seat in Cork South Central.

Melodramatic Alan wrings everything out of a role. He’s not letting go of Coveney’s complimentary car.

“So now you have a Minister going around in a garda car, which is costing €200,000 a year, without permission,” he thundered.

“It doesn’t require government permission,” insisted Micheál, who must be wondering when the other two Ugly Misters are going to start carrying some of the show for him.

“It does,” shouted Kelly.

“It doesn’t,” the Taoiseach shouted back along the theatre seats.

The panto ended on a bum note with Tuesday’s surprise internet sensation Richard Bruton (67) stripping down to his Speedos and revealing his ripped torso, leading to fainting fits in the audience and a nasty altercation with one of the Three Ugly Misters (Leo Varadkar).

The former taoiseach protested that the former minister was trying to steal his thunder and immediately brought down the curtain.