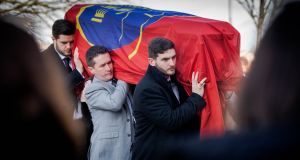 The remains of Garrett Fitzgerald are carried in a coffin draped in a Munster flag into St Joseph’s SMA Church in Cork on Monday. Photograph: Ryan Byrne/Inpho

A former Munster Rugby CEO and coach who was at the helm of the club during the peak glory years for the province was laid to rest on Monday.

Sporting figures in attendance at the requiem mass of Garrett Fitzgerald at the SMA Church in Wilton, Cork city included Captain of the current Munster team Peter O’Mahony and stars of the Heineken cup winning sides of both 2006 and 2008.

Rugby players both past and present and coaches and staff provided a special guard of honour which stretched almost 500m from the church.

Fitzgerald (65) passed away at Marymount Hospital in Cork city on February 14th following an illness. He only retired as CEO in June of last year having been appointed in 1999. During his tenure Munster won two European Cup titles.

In the years before his death Mr Fitzgerald was awarded an honorary doctorate at the University of Limerick, was presented with the Richard Harris Patron’s award and was honoured by the Federation of Irish Sport for his outstanding contribution to sport.

He won a Munster Senior Schools Cup with CBC in the early 1970s and later coached the school to a total of five Munster Senior Cup wins. Over a nearly twenty year career, he played for CBC, UCC and Cork Constitution. He went on to become Munster coach and CEO.

Fitzgerald is survived by his wife Aine O’Donnell, and his children Megan, Jamie and Michael as well as his four siblings Roger, Nicki, Mary and Rose. He was laid to rest at St James’ Cemetery in Chetwynd, Cork following the requiem mass.