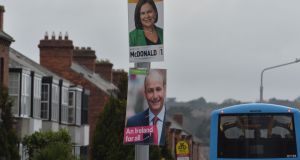 Election Posters for Sinn Féin and Fianna Fail. Candidates in Fingal have been granted a bit more time to remove their posters. Photograph: Alan Betson

Fingal County Council has granted an extension to the deadline for the removal of election posters, to compensate for the impact of Storm Dennis.

Posters were due to be removed before midnight on Saturday, but due to the disruptive effect of the storm, which brought gusts of 120 km/h and left thousands of homes and businesses without power, that deadline has been extended to today.

The extension seemingly only applies to the Fingal area of Dublin. A spokeswoman for the council said the extension means the deadline is now midnight on Tuesday, February 18th, had been granted “for health and safety reasons”.

However, several other local authorities have indicated they will allow some flexibility on the deadline, given the extreme weather conditions.

No local authority contacted has yet issued fines to candidates. Sligo County Council said it was carrying out a survey of the county to establish if any posters have not been removed. A spokeswoman for Longford County Council said it anticipates posters may have become dislodged given recent storms, and in the first instance will ask candidates to remove posters when they are discovered, moving to enforcement only if cooperation is not received.

Galway City Council said “as the weather was not amenable to removing posters on Saturday or Sunday safely, we will exercise a certain discretion”.

Other local authorities indicated they would be more hardline. Dún Laoighaire-Rathdown County Council said it hasn’t come across any errant posters, but will issue fines if it does.

Last year, Dublin City Council issued more than €30,000 in fines to election candidates who broke the littering laws. The local authority said it issued more than 232 fines to those who postered too early, or left their posters up too long.

Several candidates, and indeed towns, around the country opted to go “poster-free” amid concerns about visual clutter and the environment. Ten-time general election candidate and former Lord Mayor of Dublin Christy Burke ran a poster-free campaign in Dublin Central.

Denis Naughten, the former minister for communications, climate action and environment, also ran a poster-free campaign in Roscommon-Galway. He said the decision was a “clear statement of intent in relation to my determination to try to reduce the amount of plastic being generated rather than just soundbites.” He said the materials used for posters take several hundred years to decompose. He took the second seat in the constituency.

A survey undertaken by Claire Byrne Live/Amárach in 2018 found that 77 per cent of Irish people thought the use of posters should be banned, and several towns, led by Tidy Towns groups, have sought to enforce partial or complete bans in their areas.