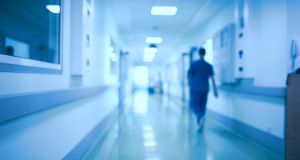 A middle-aged man required emergency treatment at a Dublin hospital after a tube inserted in his belly to drain urine from his bladder was pushed too far and ended up coming out his penis.

The patient complained of a sore abdomen and “significant penile pain” when he presented at the emergency department of Beaumont Hospital, reporting that he had produced no urine since the tube was replaced by a local physician 24 hours before.

On examination, doctors saw that the tip of the device – a suprapubic catheter – was “clearly visible” emerging from the man’s genitals. It had been pushed into his urethra from the bladder when an “anchoring balloon” was inflated.

The “unique case” was documented in a research paper by three clinicians at Beaumont Hospital, which was published in this month’s issue of the Irish Medical Journal.

They reported treating the patient by “gently deflating” the balloon and replacing the suprapubic catheter. “Bleeding and discomfort” subsequently settled, and two litres of urine were drained from his bladder.

The authors of the paper stated that there were “important learning points” arising from the case. They said urine draining should be observed after routine catheter changes, and genitalia should be examined when a misplaced catheter is suspected.

The patient suffered from neuropathic bladder secondary to multiple sclerosis, making it impossible for urine to be properly drained or stored. A suprapubic catheter is often favoured in such cases “due to its relative comfort”, the paper notes.

However, misplacement of the catheter is possible due to the typically small capacity of neuropathic bladders. In this case, it entered through a hole under the patient’s navel, entered the bladder, and exited again via the urethra.

“The catheter was advanced through the suprapubic tract and inadvertently into the proximal urethra within inflation of the anchoring balloon [which is designed to keep the device in place],” the authors explained.

The patient was kept for a period of observation to ensure adequate catheter drainage, and was well when he was later discharged.