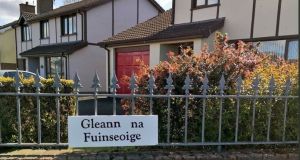 The council said the sign which says ‘Gleann na Fuinseoige’ - the Irish placename for Ashdale - had been erected on railings without planning consent. Photograph: Twitter

An woman in her 80s has been told by a local authority in Co Antrim she may face prosecution for erecting an Irish language street sign outside her home.

The 85-year-old pensioner from Randalstown received a letter from Antrim and Newtownabbey Borough Council last week claiming the sign which says ‘Gleann na Fuinseoige’ - the Irish placename for Ashdale - had been erected on railings without planning consent.

The lettersaid: “This unauthorised sign should be removed within one week of the date of this letter.

“The council wishes to emphasise that unless you undertake to put the matter right you may be prosecuted.”

The letter also indicates that “the display of an unauthorised advertisement is an offence” and conviction can result in a maximum fine of £2,500 “with further daily fines of £250 for each day on which the advertisement continues to be displayed”.

A statement from the council on Tuesday said the letter was sent to the woman following a complaint from a member of the public.

“The erection of the sign constitutes a breach of planning control and in line with normal procedures the Council issued a warning letter to the householder to have the sign removed.

“The display of signage is governed by the Planning (Control of Advertisements) Regulations (NI) 2015 and it is an offence, liable to prosecution, for signage to be displayed without the requisite consent in place.

“The Council receives a large number of complaints regarding alleged unauthorised signage in the Borough and in the last 12 months has issued warning letters in approximately 80 cases.

“It should be noted that the Advertisement Regulations make provision for the Council to erect street signs, but does not permit residents to erect their own street signs.”

‘An abuse of power’

The woman’s granddaughter, Medb Ní Bhúláin, rejected the suggestion the sign breached planning regulations and described the content of the letter as “an outrageous response and abuse of power”.

“The council has done little to nothing to protect and support the language, as they are obliged to under various treaties, and instead focus their energies on targeting those that erect small Irish signs on their own property,” she said.

“The council stated that it was in breach of their advertising policy. I am, however, aware that this sign falls outside of the remit of that same advertising policy due to both dimensions and location of the sign. I have now sought legal advice.

“I do hope, however, that this incident will spark a broader conversation about the regressive approach this council takes with relation to the Irish language. The blatant hostility must end.”

An Dream Dearg Irish language campaigner Ciarán Mac Giolla Bhéin said the council action was “outrageous” and serves “to reinforce the anti-Irish reputation we now openly associate with this council”.

Last year the unionist majority council performed what Irish language activists in the North described as “a dramatic u-turn” on its ‘English only’ street signage policy.

“This is the same council that only last year tried to ban bilingual signs,” he said.

“They ploughed ahead with this course of action despite being told repeatedly that their policy was illegal and waited until the day of the Judicial Review hearing to withdraw it.

“Once again we see public money wasted by those hellbent on opposing the Irish language.”

A major stumbling block to the formation of a new Stormont Executive, which collapsed in January 2017, has been around the introduction of an Irish Language Act (Acht Na Gailege) the British government committed to introduce in the St Andrews Agreement in 2006.

The decision in December 2016 by former DUP Communities Minister Paul Givan to withdraw a £50,000 Líofa Gaeltacht Bursary Scheme for disadvantaged children was regarded as the final straw for Sinn Féin in their decision to collapse Stormont, largely over the botched Renewable Heat Incentive (RHI) green energy scheme.