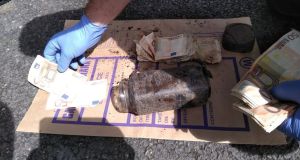 Gardaí discovered this cash box buried in the ground with €9,000 inside. Photograph: An Garda Síochána

Four men remain in custody on Tuesday morning after gardaí made the arrests in connection with a suspected gangland shooting.

The gardaí also discovered a cash box buried in the ground with €9,000 inside.

The arrests were made in the Hartstown area of Clonsilla, Co Dublin on Monday by gardaí attached to the armed support unit, assisted by members of the Defence Forces led by 2 Field Engineer Company, Athlone and 27th Infantry, Dundalk.

During the search, army engineers using ground-penetrating radar located a container with approximately €9,000 in cash buried approximately a metre below the surface.

Three of the men, all in their 20s, were arrested in connection with the gangland shooting of Lee Boylan (24) of Blanchardstown, Co Dublin on the evening of March 6th.

Mr Boylan was shot 10 times in the neck and body as he sat in a white Volkswagen van on Blakestown Road, Dublin 15. He survived though he was badly injured. His father Noel was shot last week. He too survived.

A fourth man was arrested in Limerick by local detectives and a number of homes were also searched in connection with the shooting of Lee Boylan.

The searches in Dublin and Limerick are part of an ongoing strategy tackling organised crime gangs.

All four males currently in custody in Blanchardstown and Finglas Garda Stations are being detained under Section 50 of the Criminal Justice Act 2007.