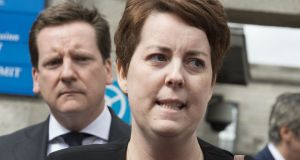 The State Claims Agency has formally appealed the High Court judgment in the Ruth Morrissey case but says its action will have no impact on her €2.1 million award from the court.

The agency lodged papers in the Supreme Court on Monday appealing the case in relation to the HSE’s primary and vicarious liability as well as Mr Justice Kevin Cross’s finding that a screener must have “absolute confidence” before giving a test the all-clear.

MedLab Pathology, one of two testing labs found to have misread Ms Morrissey’s smear tests, confirmed on Monday that it too is appealing the judgment this week. The second lab, Quest Diagnostics, has already stated it is appealing the decision.

With the ruling seen as a test case for dozens of others being taken against the cervical cancer screening programme, it remains unclear how the State can appeal the judgment without delaying or affecting the award to Ms Morrissey, who is terminally ill.

Political sources said a number of legal mechanisms were being explored and it was hoped to have finality on a solution over the next few days. Despite the delay in coming up with a mechanism, more than a week after the decision was taken to appeal, they expressed confidence one could be found.

Barrister Paul Anthony McDermott said it was wasn’t clear at this stage how the award to Ms Morrissey could be “disconnected” from an appeal, but this might become clearer when the notice of appeal was filed.

Mr McDermott said the courts recognised the principle that “litigation can be about more than the money. You could have a situation where the State accepts the factual result – such as the award of money – but needs to appeal the route taken to get to that result so a precedent is not set.”

Campaigner Vicky Phelan described the State’s appeal as “an affront to Ruth Morrissey”. During the trial Quest Diagnostics and MedLab Pathology made submissions on the “absolute confidence” issue, she pointed out, while the State “declined to do so”.

“Minister for Health Simon Harris and the SCA are claiming that the appeal is a partial one and the award of damages is not being challenged but if the appeal to the Supreme Court is successful and the court overturns the decision in Ruth’s case, then, obviously, Ruth’s award will be at risk.”

Ms Phelan, whose own court case last year led to the revelations about an undisclosed audit at CervicalCheck, called on the Minister and the SCA to “do the morally right thing and protect Ruth’s award”.

The least Ms Morrissey deserved after 36 days in court was to hear about the decision “in an appropriate way” rather than through the media. The HSE’s disclaiming of liability was “bizarre” and “worrying for the health service”, he said.

Ms Morrissey’s solicitor Cian O’Carroll said on Monday his client had still not been told directly about the SCA’s appeal.

Mr O’Carroll accused the Minister for Health of “looking for political cover” in saying he would seek to protect the total award to Ms Morrissey.

“I’m curious to know why he’s distancing himself from this decision, when he’s the one who’s effectively addressing it on television yesterday before our client was informed.

“He’s clearly involved in these decisions.”

Medical figures have warned the judgment threatens the future of screening services by making impossible demands for accuracy. Mr Justice Cross dismissed such criticism as “hysterical” and said he was merely implementing the standard applying in the UK. Government Ministers are fearful they will be accused of excessive harshness if their actions impinge on Ms Morrissey’s award.

Ms Morrissey’s health has deteriorated in recent weeks and she returned home only recently from a hospice.