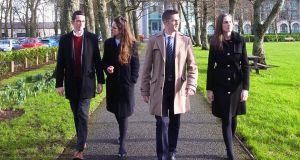 Siblings Isaac, Kezia, Enoch and Ammi Burke, who were banned for life from all student societies at NUI Galway in 2014

Four siblings who claim their freedom of speech and religious expression was curbed by NUI Galway have rejected a call from the university to drop their legal case.

Isaac, Kezia, Ammi and Enoch Burke were banned for life from all student societies at the university on November 10th, 2014.

Before their ban, they had been distributing material and putting up posters relating to their Christian beliefs, including about gay marriage and abortion, on campus.

According to the Burkes, the university alleged they were suspended for misuse of funds.

The siblings deny the allegations that they misused funds and have alleged discrimination on the grounds of religion.

The university last week told the Burkes it was lifting their lifetime ban, and it offered to seek no order on costs if they discontinued their legal action against it.

“In light of the lifting in full of the societal ban our client wishes to make an open offer herein that in the event that the appellants agree to issue a notice of discontinuance in relation to the above proceedings (the remaining claims being all that are live between the parties) our client would be agreeable to the striking out of these cases and would seek no order as to costs against the appellants,” the university wrote in a letter to the Burkes.

However, the siblings have rejected the offer and are pressing ahead with their case, which is due to begin on Tuesday.

“It has been over four years and six months since we were banned for life from societies at NUI Galway,” Enoch Burke said. “Now, on the eve of the court hearing, that ban has been lifted. The university should never have imposed this ban in the first place and we are pressing ahead for justice.

“The whole point of going to court is that the equal status Acts are there to offer redress for those who have been discriminated against, and that is our claim against the university,” he added.

The Circuit Court hearing is listed for three days at Galway city courthouse, beginning on Tuesday.

The Burkes must prove that they were less favourably treated by the university, and that they were treated in such a manner because of their religious beliefs.

The Burkes, from Castlebar, Co Mayo, were unsuccessful in complaints previously heard by the Workplace Relations Commission, and maintain there were shortcomings in that process.

They had been active members of two college groups, the Christian Union and Life societies, which promoted “teachings of Christianity” and “sanctity of human life”.

The siblings have claimed they were the subject to organised campaigns of opposition on campus, the most visible signs of which were sustained ripping-down of posters they put up.

They have claimed that this and other incidents amounted to a campaign of harassment and intimidation, and that they had submitted numerous complaints to the college authorities as far back as March 2013.

They previously wrote to then tánaiste France Fitzgerald concerning the case, and called for the Joint Oireachtas Committee on Justice and Equality to investigate their case.