Bill Clinton concerned about impact Brexit will have on NI 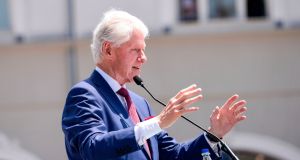 Former US president Bill Clinton said the Brexit vote was conducted with almost no consideration of the potential damage to the North. Photograph: Armend Nimani/AFP/Getty Images.

Former US president Bill Clinton has expressed his concern about the impact of Brexit on Northern Ireland and said the vote was conducted with almost no consideration of the potential damage to the North.

Speaking to RTÉ at an event in New York where a portrait of him by the artist Colin Davidson was unveiled, Mr Clinton said that those who were for Brexit had portrayed it as a liberation of the UK.

He warned there was a threat that Brexit would “consign one of the greatest nations in human history to a smaller role just so the people who have historically been in control can stay there.

He added that he hoped Brexit did not “boomerang” for the British.

When asked about the impasse at Stormont he said that nobody wants to go back to violence and no one wants to see Stormont fail.

“But how can you make a deal until you know what Brexit is?” he asked.

Mr Clinton said he thought the chances of a unity government would go “way up,” once “they know what they have to unify about.

“I’m not as concerned as some are.”

However, he said he had hoped there would be an interim unity government. “Since they didn’t do that, the main thing is that no one is breaking the glass yet.”

The leaders of both parties were trying to “keep a lid on violence and are for peace.”

There was a possibility that the issue would be “kicked down the road”.