Varadkar tells FG TDs school closures may continue until May as 40,000 offer to help HSE

The Dáil has reconvened with a reduced numbers of TDs as politicians practice social distancing measures as part of the effort to tackle coronavirus. Video: Oireachtas TV 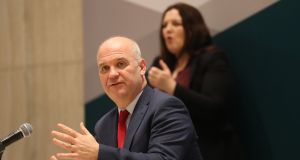 A further 191 coronavirus cases have been diagnosed in the State, bringing the total number to 557.

The Department of Health also announced on Thursday evening that a third person had died as a result of Covid-19 - a female from the east of the country.

The 191 cases confirmed between Wednesday and Thursday, the largest increase since testing began, saw the State total rise by 52 per cent.

The rise comes after a significant increase in the number of tests being carried out. Doctors said patients should expect to wait up to a week after first making contact with their doctor for the results of Covid-19 tests, amid huge levels of demand.

“The HSE is now working rapidly to identify any contacts the patients may have had, to provide them with information and advice to prevent further spread,” the department said in a statement.

Chief medical officer Dr Tony Holohan extended his condolences to the family and friends of the woman who died of coronavirus.

Taoiseach Leo Varadkar told a meeting of the Fine Gael parliamentary on Thursday evening that a substantial surge in coronavirus numbers is expected in the next seven to 10 days and this may push the re-opening of the State’s schools back to April or May.

One TD who attended the meeting said: “The numbers are going to go up sharply. That was his clear message. We will not see the effects of the social distancing measures for seven days at least.”

The latest data from the HSE’s Health Protection Surveillance Centre (HPSC) shows that, as of midnight Tuesday, 55 per cent of the 350 confirmed cases were in males and that 26 clusters of the coronavirus had been detected.

It said 31 per cent of those who had fallen ill with Covid-19 had been hospitalised and the median age of those in confirmed cases was 43 years.

Dr Holohan said it was “too early” to see any impact of social distancing measures being encouraged by health authorities.

People are being advised to keep a distance of two metres between themselves and others.

Speaking as the Dáil on Thursday debated emergency legislation drafted in response to the pandemic, Tánaiste Simon Coveney said leadership provided by the Oireachtas in terms of people protecting themselves would be the difference between whether Covid-19 “kills hundreds of people, thousands of people or tens of thousands of people” in Ireland.

Earlier, Northern Ireland, which has 68 confirmed cases, recorded its first death due to Covid-19. The patient was elderly, had an underlying medical condition and was being treated in a hospital in the greater Belfast area.

The likely impact of the virus on Irish society was underlined on Thursday when Minister for Social Protection said projections that up to 400,000 people could lose their jobs as a result of the outbreak may be realised. This would represent some 17 per cent of the State’s workforce.

“It could be potentially as drastic [as those projections],” she said. “We have not overused the word unprecedented in the past few days but it has been that.”

Minister for Education Joe McHugh announced that oral and practical exams for Junior and Leaving Cert students have been cancelled as a result of the outbreak, but students will be awarded full marks for them. He said the decision, taken in light of the virus which has already shut schools around the country, was “the fairest response we could take in the circumstances”.

The Government announced that a temporary ban on evictions and rent increases for those affected by the virus would be introduced next week. This follows the announcement of mortgage breaks for homeowners and assistance for business under pressure due to the outbreak.

A HSE appeal to people to consider working in the health service during the outbreak has now yielded more than 40,000 expressions of interest. On St Patrick’s Day a major recruitment campaign was announced to secure doctors , nurses and other healthcare staff ahead of an expected major surge in demand as a result of people falling ill with coronavirus.

“We will shortly commence a really tough time but all of us in HSE are inspired by this response,” he said.

Mr Varadkar on Thursday told British prime minister Boris Johnson that he welcomed the decision by the UK government to close its schools.

During a 20 minute telephone conversation, the main focus of which was the Covid-19 situation and the actions taken by their governments, Mr Varadkar said the closure of schools had “brought a greater closeness between the position in Ireland and Northern Ireland”.

Mr Johson and Mr Varadkar agreed to align their actions, in so far as possible, on the outbreak. The Government said in a statement that the two leaders had also discussed developments in Europe and internationally.

“ They agreed on the importance of close co-operation in the context of the operation of the common travel area between Britain and Ireland,” the statement continued.

“They both expressed the wish that political parties in Northern Ireland work collaboratively in the restored Executive. They also discussed the recent British proposals concerning how to handle legacy issues.”