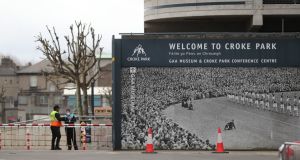 Security guards are seen at Croke Park in Dublin, which is being used as a testing facility for Covid-19. File photograph: Niall Carson/PA Wire

Patients should expect to wait up to a week after first making contact with their doctor for the results of Covid-19 tests, amid unprecedented levels of demand resulting from the coronavirus pandemic, frontline doctors have said.

While fast-track pathways to testing are being rolled out for healthcare workers and urgent cases, Dr Maitiú Ó Tuathail, who practises in Ranelagh in Dublin, said a routine case can expect to wait between three and five days for a testing slot to become available after contacting their GP.

Healthcare workers, he said, should receive a test on the same day, although they will then have to wait for it to be analysed. Urgent cases can also expect to be swabbed quicker under criteria introduced by the HSE.

Once the test is done, usually by means of a nasal swab, it can take between 24 and 48 hours for the sample to be sent to a laboratory, analysed, and for results to be communicated to a person’s GP.

Meath GP Dr Stephen Murphy urged those awaiting tests to self-isolate, and be prepared for two distinct waiting periods. “There’s going to be a delay between the GP talking to them [and testing] and there’s going to be a delay to be processed,” he said. “If they are self-isolating in that time, they are doing everything we need them to be doing.” He said further contact with the health service should only take place if the person is getting more unwell.

Dr Ó Tuathail is one of six GPs in his surgery, which is sending on 300-400 requests for testing daily, and has fielded thousands of Covid-19-related queries in recent days. The GP said it was difficult to predict exactly how quickly testing would progress, as the expansion of criteria for testing had caused a surge in requests which the system was now grappling with. The first wave of patients to be tested under the broader criteria are only in the process of being swabbed and their samples analysed now. He said that patients he had referred for testing on Monday were receiving appointments to be tested on Friday.

Other doctors said they expected some results from tests taken earlier this week to arrive back on Thursday or Friday.

The volume of tests being requested on GPs’ Healthlink online system caused it to crash on Monday, and while it is working again, GPs said it was slow, with some referrals that usually take a few seconds taking up to 15 minutes to process.

Dr Mark Murphy, a GP in Dublin’s south inner city, said he had not been able to successfully refer a patient for testing until Tuesday of this week, after technical issues with the web referral system had been resolved and the criteria for test eligibility were expanded.

“At the moment, it’s taking days,” he said. “I’m trying not to be too pessimistic but it is taking significant time to get tested and several days to get results.”

Dr Ó Tuathail said he expects this rush for testing to persist for some time. “Today we are as busy as yesterday, and we envisage in the practice that we are looking at at least two weeks of this,” he said.

The HSE is responding to the surge by bringing more testing facilities online. Up to 34 testing centres are set to have online capability by the end of this week. Two drive-through testing facilities are planned at Dublin’s Croke Park and Cork’s Páirc Uí Chaoimh. Minister for Health Simon Harris told RTÉ Radio on Thursday that he plans to build capacity to the point where 15,000 tests a day can be carried out. He said 39,000 more testing kits are arriving in a shipment on Thursday.

Public health experts emphasised the importance of testing. Prof Mary Horgan, president of the Royal College of Physicians in Ireland and former dean of the UCC medical school, said that along with social distancing, robust and wide-ranging testing and contact tracing was the most important way to combat the spread of coronavirus.

She said that as the HSE’s testing capacity ramps up, waiting times will come down. “The time to taking the swab to getting the test result will decrease, they’ve put a huge amount of resources into it,” she said.