‘As I self-isolate, I am scared, but hopefully not scared to death’

Medical miracles have kept me alive. Could a bug from a store in China eventually do for me? 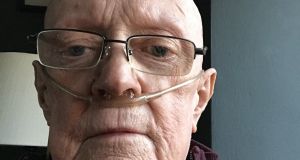 Paddy Murray: “I am in the high-risk category when it comes to coronavirus/Covid-19. So I’m taking advice and not taking chances. Chronic obstructive pulmonary disease (COPD) is progressively diminishing my lung capacity and I need to protect what’s left.”

I am doing so because I have been in hospital 16 times in the past eight years with lung infections and because only one fifth of my lungs is functional.

I am in the high-risk category when it comes to coronavirus/Covid-19. So I’m taking advice and not taking chances. Chronic obstructive pulmonary disease (COPD) is progressively diminishing my lung capacity and I need to protect what’s left.

Even without the current pandemic, I take precautions when winter comes. I stopped going to my local sports club in Terenure for a drink – a major sacrifice! But in previous years I occasionally broke my own rules if I became stir crazy.

Not this time. This time it’s different.

This time, when I wake up in the morning, I actually thank God that I have woken up. And as I emerge from sleep I also briefly wonder if the whole coronavirus thing was a dream. And when I realise that it wasn’t, that it’s real, fear strikes me. Yes, I’m frightened.

I have outlived several prognoses. Some doctors who are still treating me didn’t think I’d make it to 60, let alone 66

I was diagnosed with lymphoma 22 years ago and my reaction to that diagnosis was stoical. I genuinely wasn’t frightened. There were no guarantees, but doctors assured me the condition could be treated. The phrase they used was “we hope you die with it, not of it”.

I was prescribed a new wonder drug – which worked for a while. I’ve had full body radiation. I’ve been on trial drugs. I had chemotherapy to kill off my immune system so my body wouldn’t reject a bone marrow transplant which rid me of the lymphoma.

But a couple of years after all that, I got the diagnosis of chronic COPD.

I have outlived several prognoses. Some doctors who are still treating me didn’t think I’d make it to 60, let alone 66.

And if you’re wondering why I’m mentioning all that, it’s because on these days of self-isolation, I think a lot because I have a lot of time to think. I think about life and death and about the medical miracles that have kept me alive, and about how a bug from a food store in China could eventually do for me.

I have, throughout these illnesses, remained positive, enjoyed music live and otherwise as I have always done, and whinged relentlessly – an important part of my approach to illness!

But now, as I self-isolate in my home, I am frightened. I am scared but hopefully not scared to death.

I get relief when I hear Ronan Collins’ voice. Arena with Sean Rocks is an escape. And I really enjoy John Creedon in the evening. All three help me to escape from the real world. Of course, I also get relief by switching off radio and television and reading a book.

If someone offers to call, I tell them it’s fine as long as they’re prepared to have a shower in Dettol and a body scrub with Brillo before they come in!

Right now, I’m going through a couple of books a week. (In case you’re wondering, I have recently enjoyed The Train in the Night, a memoir by music critic Nick Coleman largely based on his losing his hearing. I also enjoyed Live While You Can by Fr Tony Coote who died of MND last year. And I’m re-reading the John Wyndham classic, The Day of the Triffids – a science fiction tale about an aggressive plant species killing people all over the world! I’m obviously not reading to cheer myself up.)

Much as I’d like visitors to call, I’m not issuing invitations. If someone offers to call, I tell them it’s fine as long as they’re prepared to have a shower in Dettol and a body scrub with Brillo before they come in! They know I’m not serious, but they get the message.

I called the HSE helpline and they were helpful and certain that walking the dog, while using my portable oxygen, would not only do no harm, but would be good for me. So I walk the mutt a couple of time a week.

I write for hours. Unpublishable novels. A memoir that will never see the light of day. A blog with 339,975 fewer followers than Pippa O’Connor.

Now, there’s not even sport on television for me to enjoy.

And I’ve a 13-year-old daughter who, like other teenagers without school to attend, is bored out of her brains, having been advised not to mix with friends during this crisis.

I may very well go completely insane before this all ends, if it does.

And the plan is to continue to thank God every morning for that.

Unless, of course, it really is a dream.