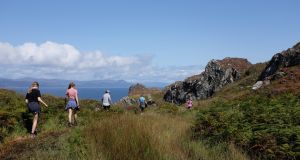 St Patrick’s Day may historically start the Irish tourist season but Covid-19 has ended any prospect of this happening this year in West Cork, as the area is hit hard by the impact of coronavirus.

Although there is no overall official figure available for the value of tourism to West Cork as it is counted as part of Cork and Kerry generally, all evidence suggests it runs into tens of millions of euro and employs thousands annually.

Just by way of an indicator, West Cork Development Partnership commissioned a study in 2012 which found that walking tourism in the region was worth in the regional of €14 million and created more than 350 full-time equivalent jobs.

The absence of visitors thronging the streets of towns like Bandon, Kinsale, Clonakilty, Dunmanway, Skibbereen and Bantry for St Patrick’s Day festivities on Tuesday augurs badly for the forthcoming tourist season in West Cork.

The arrival in Covid-19 in Ireland had already created uncertainty in the marketplace and with bookings falling away, many have decided to close.

The Government’s decision to limit mass gatherings to 100 people internally, as well as the closure of pubs and advice to people to practise social distancing, have led to the decision of many hotels in West Cork to shut for two weeks.

Among those who have closed are the four-star Inchydoney Island Lodge and Spa, Dunmore House Hotel and Fernhill House, all in or near Clonakilty and the Parkway Hotel in Dunmanway.

Also opting to shut down until the Government’s review date of March 29th are the Kinsale Hotel and Spa and the Eccles Hotel in Glengarriff and the West Lodge Hotel in Bantry, which will close after its last guests leave on Wednesday.

West Lodge manager Mark Golden said the hotel decided to close down until the end of March with regret as it involves the laying off of most of their 45 full-time and part-time staff, but the hotel felt it had no option.

“Unfortunately the situation is changing pretty rapidly, even from last week, but we put the safety of our guests and our staff first and we’ve decided to close for two weeks – there’s not much point in being open with few bookings.”

Mr Golden revealed about 70 per cent of the West Lodge’s business is from the domestic market, with the remaining 30 per cent coming from abroad, but both sectors were showing a rapid fall off in bookings due to the Covid-19 crisis.

“There’s no income and at the same time you still have your operating costs and they are not going to go away because we are closed for a short while – it’s all uncharted territory and scary times for the industry generally.

Mr Golden said that the hotel will remain open on Tuesday night to accommodate a number of overseas visitors who are already booked in but once they leave, the hotel will close down for the next two weeks.

Neil Grant, the manager of the Celtic Ross, is operating a similar policy of keeping a skeleton staff on for the next few days to ensure a small number of American guests have somewhere to stay until they leave on Thursday.

“We are open today and tomorrow purely for some overseas guests that are staying here until they can fly back to the United States but we are closing our doors on Thursday morning – at the moment until the end of March.

“We’ve already seen one UK group cancel their book for the first week in April and another group cancel later in April so I’m presuming March 29th could just prove a review date and the closure could turn into a longer period.”

Mr Grant had to break the news to the 30 or so core staff and 40 casuals at the 66-bedroom hotel on Monday that they were facing being laid off but the omens were not good from last week as Covid-19 crisis began to impact.

“About 70 per cent of our business is domestic, Great Britain accounts for another 15 per cent or 16 per cent and the US another 8 per cent or 9 per cent but all our US business for April is cancelled, so we can effectively write off April at this stage.”

One hotel which is currently open is the West Cork Hotel in Skibbereen but manager Barry Looney said management there are reviewing matters on a day by day basis and trying to adapt to the changing world of social interaction.

“We’re abiding by all the guidelines and reviewing the situation day by day – we’ve adapted by doing take-aways where somebody rings in, pulls up outside and beeps on the horn and we give them their meal and they tap and go.

“It’s going well so far but it’s not going to make for the shortfall in the sit-down trade.”