‘The scale of the surge coming towards us is of biblical proportions,’ says health minister 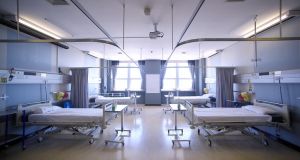 Hospital capacity in the North has been increased so that 280 adults with coronavirus could be treated in designated wards. Photograph: iStock

Northern Ireland recorded its first death from coronavirus on Thursday as its health minister warned of a “worst-case nightmare scenario” in which 15,000 people could die of the disease in the North.

“The scale of the surge coming towards us is of biblical proportions,” Robin Swann said.

As many as 80 per cent of the North’s population could be infected with coronavirus, also known as Covid-19, he said, but if people implemented social distancing and other measures, the “peak” could be reduced by 50 per cent, and deaths by up to a third.

“This won’t be our last death, but we must do everything in our power to keep that as low as possible, and that is an individual responsibility,” Mr Swann said.

The North’s first fatality from coronavirus was an elderly man who had an underlying medical condition, and who was being treated in a hospital in the greater Belfast area.

A total of 77 people in Northern Ireland have now tested positive for coronavirus, but the true figure is believed to be significantly greater. Testing is only carried out on patients in hospitals who are suspected of having the virus.

Mr Swann outlined to the Assembly on Thursday the measures which have been taken to prepare the health service for a “surge” in cases over the next month. This included the instruction to maintain social distancing until at least mid-April.

Testing capacity has been increased to more than 200 tests per day, and will be expanded to allow 800 tests daily.

Hospital capacity has been increased so that 280 adults with coronavirus could be treated in designated wards. The number of critical care beds, currently at 88, can be increased by a further 38.

Forty additional ventilators have been ordered, bringing the total available to 179 by the end of March.

More than 200 final-year medical students at Queen’s University, Belfast have joined the medical register four months early and are immediately available to work in hospitals.

Meanwhile, a limited number of schools will remain open to care for the children of healthcare workers and other key employees.

Students will not take GCSE, AS or A-Level exams this summer. The education minister, Peter Weir, said the department will “develop a robust process for awarding grades”.

The sportswear manufacturer O’Neills, which employs more than 700 people in Strabane, Co Tyrone, announced on Thursday night that it was laying off most of its staff until at least May because of the “complete cessation of orders” due to coronavirus.

Face masks: All you need to know about where, when and why you need one