Coronavirus panic buying: ‘The thing that scares me is the people’

People rush to the shops despite Government reassurances about supplies

March 12th, 2020: Customers have swamped the aisles in both Sundrive and Crumlin Shopping Centres despite Government reassurances about supplies. 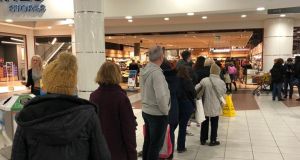 “This is just crazy,” were words heard over and over again as shoppers poured into one of the biggest supermarkets on Dublin’s northside within moments of the news breaking that Ireland was going into a partial lockdown.

People said it to strangers they passed in the aisles of the Cabra Tesco, they said it to friends and family on the other end of phone lines. And they said it aloud to themselves as they jostled for space on aisles and stared at shelves stripped of pasta, rice, toilet paper, flour, tinned tomatoes and dozens of other products that people decided were essential to ride out the coronavirus storm.

Yvonne Murray from Cabra had beaten many of her rival shoppers to the punch and was already packing her car with bottled water and toilet paper when the Government announcement was made in faraway Washington at 11.30am.

“It was mayhem in there just now,” she said. “Just look at the car park. It is absolutely jammers and it is never full here. Never, not even on Christmas Eve.”

Murray said she routinely shopped in this Tesco on a Thursday morning and had not made the trip because of the coronavirus panic which had clearly infected many others who were looking for places to park their car.

“The main thing I would be concerned about would be that the shops will close and we won’t be able to buy anything. I mean just look at what is happening in Italy? Their healthcare system is 10 times better than ours and that whole country is shut.”

She said she had stocked up well and had enough food to feed her family for two weeks and added that she was planning to buy more as the day went on.

“I would be afraid that the farmers will get sick, or the factory workers, and then they would have to close. Or what would happen if the shop workers got the virus?”

Panic buying aside, Murray admitted she was increasingly worried about the impact coronavirus would have. “I have heart problems and I have lung problems and if I get it I am just wiped out. I don’t drink and I don’t smoke and still I have every illness life can throw at you. I am gasping as it is so of course I am afraid. I have a face mask at home but I only have the one and it is supposed to be disposable.”

As she spoke her daughter Jade Murray loaded the car. “We got here at half nine and even then it was mad busy,” she said. “I am worried about food supplies and what would happen if someone in the shop got sick and it had to be closed.”

The Government has stressed there is no need for panic buying, warning that people will instead “cause a problem” that currently does not exist if they begin stockpiling.

Minister for Health Simon Harris said people should “buy what we need to provide for ourselves and our families and our loved ones” but he said that everyone should consider the “unintended consequences of taking something that somebody else requires”.

On Thursday, it was bedlam in the shops although the stock of fresh fruit, vegetables, dairy products, meat and bread was good.

What many people were looking to buy was products with a long shelf life.

Two men shopping together in the north Dublin Tesco walked quickly to the tinned tuna shelf and were dismayed to see it nearly bare.

“Dammit, there is only the expensive stuff left,” one said, gesturing at the jarred albacore tuna which retails for more than €5.

“Hang on, here’s a tray of tins,” one said and picked the lot up and prepared to balance it on the mountain of other products in his trolley.

“Ah here, leave some for some other people,” the friend said.

And he did. Grudgingly.

While some people were laughing off the mayhem, there was genuine concern on most people’s faces.

Lena Cooney from Stoneybatter, was one of the people laughing it all off. “Ah no, I am not at all nervous,” she said. “If you are going to get it you are going to get it. The only thing that worries me is my granddaughter is making her confirmation at the end of the month and she has been living it for a year. Then bang it is all gone.

“The coronavirus doesn’t scare me; the thing that scares me is the people. The panic buying is completely crazy.”

Fiona Lynch from Cabra was in the frightened camp. “My heart is racing. It is going like the clappers. I haven’t been so scared. And I have been washing all my doors and skirting board. I probably bought more cleaning stuff than food.”

Derek Cremmin from Dublin 7 was doing his weekly shop and was wandering the aisles bemused.

“I am not worried, and I am not surprised by the panic, it is just human nature. It will calm down. This is just like the snow. The shops are not closing.”

As he spoke a woman shouted over his shoulder to a friend. “You better get Mario his biscuits or he’ll have a heart attack,” she said.

There was laughter in the long but good natured queues at the tills too.

“Just look at all the pasta people are buying,” an older woman said. “There are going to be some terrible constipated people in the days ahead.”