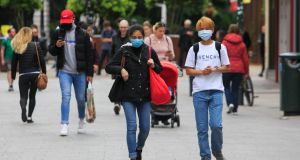 Irish consumer sentiment has rallied for a second month following a slump in April, adding to hopes that an economic downturn this year might not been as sharp as had been feared at the height of the Covid-19 shock.

The KBC Bank Irish consumer sentiment index rose to 61.6 in June from 52.3 a month earlier and 42.6 in April – a low not seen since the financial crisis in 2008. However, it remains well off the reading of 85.2 posted in February, before consumers got an initial sense of the emerging threat posed by coronavirus to the healthcare system and economy.

Mr Hughes said that if a new government is formed and comes through with a “supportive stimulus package” and there isn’t a further drop in employment numbers, fears of “substantial double-digit declines in consumer spending” this year might be avoided.

The three parties that have agreed to enter government, Fianna Fáil, Fine Gael and the Green Party, are currently balloting members on the matter, with the results due on Friday. Their programme for government commits to unveiling a stimulus plan next month.

The Department of Finance currently forecasts the economy, measured by gross domestic product (GDP), will contract 10.5 per cent this year, amid a sharp drop in consumer and business spending.

However, Taoiseach Leo Varadkar’s announcement on Friday of a speedier reopening of the economy has prompted some analysts to speculate that the slump might not be as bad initially thought. Davy economist Conall Mac Coille said he is likely to revise upwards his forecast for a 10.3 per cent GDP drop for this year to a mid- to high-single-digit decline.

The KBC latest survey saw a noticeable improvement in “forward-looking” indicators, as consumers sense the economy may be moving past the worst, according to Mr Hughes.

The index reading for consumers’ general economic outlook rose to 21.2 in June from 1.8 in April, while the view of where personal financial situations might be in 12 months’ time rose to 75.3 from 50.2.

“The details of the June sentiment survey suggest some risk that the behaviour of consumers, some cautious and others cash-strapped, may serve to limit the scale and speed of a turnaround in activity and employment,” he said. “Such concerns would support arguments for an early and ambitious fiscal stimulus to both signal and support a recovery that minimises lasting damage from Covid-19 to the Irish economy.”