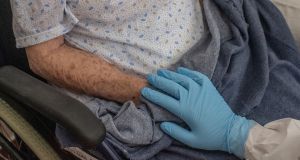 The HSE policy for testing patients before discharging them into nursing homes was changed as it learned more about the virus. Photograph: David Ramos/Getty

The Health Service Executive (HSE) is to restart the testing of patients being discharged from hospital to nursing homes for Covid-19 this week.

The practice was discontinued at the height of the pandemic, the HSE confirmed in a statement, with patients instead advised to isolate in a single room for 14 days after being discharged. The decision to abandon testing in favour of isolation was first reported in Sunday’s edition of the Business Post.

However, the policy was altered, the HSE said, as it learned more about the virus, which can transmit asymptomatically at a higher rate than was originally thought. Similarly, false negatives raised the risk that someone could be tested and not have virus detected, despite being infected.

“As experience with Covid-19 was gained, it was agreed that a higher level of caution was required with all transfers to nursing homes. The requirement for testing before transfer was replaced by a requirement to isolate all people transferred to nursing homes in a single room for a monitoring period of 14 days.”

“This was done on the basis that testing that failed to detect the virus did not give sufficient assurance that the person was not infected.”

At the same time that testing was abandoned, the State’s testing system was coming under considerable pressure, with backlogs building up across all stages of the process amid equipment shortages and capacity constraints.

A spokeswoman for the HSE said that in the next update to guidance on patient transfers, which is currently being finalised, “testing will be reinstated”. However, even if the virus is not detected, ie the test is negative, “the higher level caution of a requirement for isolation will remain”. The spokeswoman said improvements in the testing system should mean the reintroduction of testing will not cause unnecessary delays.

“In recent weeks testing turn around times have greatly improved in hospitals therefore testing is not now likely to cause delay in transfer.”

“Our point has been all the way through that all discharges need to be tested,” he said, adding that he felt the lack of testing had contributed to the spread of the disease in nursing homes.

“It gives you a baseline in terms of the resident coming out. Nursing homes need to know whether a person has had, or is Covid positive or not to develop a care plan and the nursing response appropriately.”

It is expected that the updated guidance for testing in these situations will be published on Tuesday.