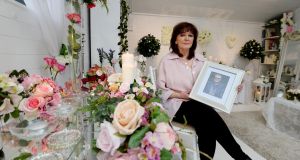 Marie Maher, whose husband Eugene was killed in a hit and run, at her bridal florist shop in Drumcondra. Photograph: Alan Betson / The Irish Times

On the evening of June 30th, 2015, Marie Maher got a phonecall nobody ever wants to get.

It had been a rare sunny evening in an otherwise forgettable summer when her husband of 37 years, Eugene, left the house for an evening cycle from the couple’s home in Drumcondra to Dollymount Strand.

He had a meeting arranged for 6pm that evening, but it was cancelled so he decided to go for a cycle before dinner and he took a familiar route .

“It’s like the bike knew the way,” said Mrs Maher.

At 7pm she got a phone call from a paramedic speaking in a calm voice on her husband’s phone. He told her her husband had been knocked off his bicycle by a hit and run driver.

I absolutely went numb. Shock took over my body. I took a fit of shakes

The seriousness of it did not really unfold until she arrived at Beaumont Hospital some time later. The doctors carried out a CT scan. The news was not good.

“It will live in my memory for the rest of my life. There were two doctors and a nurse. They told me there was nothing they could do for him,” Mrs Maher recalled.

He died that day.

“I absolutely went numb. Shock took over my body. I took a fit of shakes. It was horrific beyond horrific. I wouldn’t wish it on my worst enemy. My whole world changed. I couldn’t see myself getting to the next stage.”

She had given up her flower shop in Drumcondra in 2012 . After years working seven days a week – including bank holidays – she wanted to spend more time with her husband.

He ran a wholesale business making watches from old Irish coins. He travelled a lot.

“When he would go on long journeys to Kerry or Kinsale, I was able to go with him. We might stay for the weekend. It was a nice time of our lives when we were able to take it easy.”

Her life as she knew it came to an end the day her husband died.

Eugene Maher (62) was killed by Christopher Coleman, who had 15 previous convictions, including four for motoring offences.

Coleman had been driving at speed along Clontarf Road. As Mr Maher crossed the road, Coleman “ploughed into him”, a witness told the court case. Coleman drove off at speed.

In June 2016, Coleman received a 2½ year sentence, which was appealed by the Director of Public Prosecutions as unduly lenient.

In February 2017, the Court of Appeal resentenced Coleman to six years imprisonment with the final two years and nine months suspended.

“My husband was a forgiving man,” Mrs Maher said. “I am hoping that he [Coleman] has lots of regrets and that he can rebuild his life. I think my husband would like to think that this guy will rehabilitate himself.

“I would like to think I was a forgiving person and that I could give somebody a second chance. You have to want that second chance.”

For a long time after his death, Mrs Maher could not bring herself to go into her husband’s office. “It took me six to eight months to clear it to the point that it was just a room again.”

Weddings are all about happiness and brides are on a high. It’s a lovely place to talk to and listen to them and hear their plans and be involved

His death still hurts. The couple would have been 40 years married on March 27th. “I cried most of the day. I couldn’t believe he wasn’t with me.”

Last year, she came to the conclusion that she should return to the flower business again, but just for weddings. Flowers signify life and weddings are happy occasions. These were experiences she was bereft of after her husband died.

“Weddings are all about happiness and brides are on a high. It’s a lovely place to talk to and listen to them and hear their plans and be involved.”

In January she opened The Bridal Florist at the back of her home in Drumcondra.

But the world has changed since she ran her last flower shop. Her daughter Lisa convinced her that she needed a presence on Facebook. The shop has a Facebook page and she joined an enclosed Facebook page in Drumcondra.

Last Monday, she posted on the Drumcondra Facebook page: “My name is Marie and I’m a bridal florist based in Drumcondra. Some of you might remember me from my flower shop in Drumcondra I had for many, many years. White Knight Flowers & Gifts opposite the Skylon Hotel.

“In 2015 my husband was killed tragically crossing the road outside the Westwood in Clontarf in a hit and run. It’s taken me a few years but I have found the will to start again and I started my new business, The Bridal Florist, in January of this year.

“Thank you for taking the time to read on. Your support and that of the people in this area have been incredible over the years.”

Mrs Maher said the response to her post has been “great”, with many people wishing her well.

“Three years ago I wouldn’t have been in a place to do this because it has been really difficult,” she said. “It’s been a long road and a hard road. I am glad I am where I am. I’m trying to feel happy again. I need to get up in the morning and have a purpose.”